This clinical & histopathological report describes the clinical features, mechanism of action on drugs causing drug-induced gingival overgrowth (DIGO), diagnosis and management of patients with arterial hypertension with the regular usage of amlodipine drug. The report also highlights the importance of an involvement of cardiologist and his/her vital role in the management of amlodipine-induced gingival overgrowth.

Medication prompted gingival abundance is one of the transcendent clinical attributes of gingival pathobiology. It has multifaceted pathophysiological aspects and has remained habitually concomitant with inflammatory vagaries in the gingival tissue. Different components identified with this condition are genetic (familial) tumours and confrontational results related with the enteral/parenteral deployment of specific medications.1

For general dentists and periodontists, Drug Induced Gingival Overgrowth (DIGO)is a serious problem. Patients receiving certain medications may be engrossed by this unwanted side effect (DIGO), which can affect aesthetics, mastication, or speech articulation. It is not solely hampers the gingival pink esthetics, but it is distressing to the periodontal health by not allowing to maintain good oral hygeine, which can lead to oral sepsis, tooth decay and periodontal disease.2

An amassed integer of suppositories is accompanying by an overgrowth of gingival tissue. Presently, beyond twenty prescribed drugs (Figure 6) are connected with the enlargement of gingival tissue.3 Drugs linked with DIGO can be categorized into 3 groups:

Anticonvulsants, calcium channel blockers (CCB), and immunosuppressants. While the pharmacologic impact of each of aforementioned prescriptions is different and riveted toward a dominant unprejudiced tissues. Hence each one of them seem to act correspondingly on an aimed auxiliary tissues, that is, the connective tissue of gingiva, inducing conjoint clinical and histopathological results.

Amlodipine is another sort of dihydropyridine belongs calcium channel blocker family, which can be utilized to treat hypertension and angina pectoris. Ellis et al.,4 initially portrayed the gingival sequestration of amlodipine and amlodipine- instigated overgrowth of gingival tissue.

In the recent literature exploration, despite the fact that there is bounteous data of nifedipine, another individual from calcium channel blockers, instigated gingival overgrowth to date. Clinical appearances of gingival overgrowth regularly appear to be within 1 to 3 months, when the beginning of the concomitant prescriptions. Gingival overgrowth usually begins in the interdental papilla, most commonly on the labial side of the anterior segment. The lobules are gradually formed, depending on the degree of inflammation caused by local factors, the formed lobules may either inflamed or fibrous.

Fibrotic amplification is typically restricted to the attached gingiva yet can influence the crown and cause broad deformation of the gingival tissue. In the current case report, an occurrence of AIGO has been acquaint with following treatment approaches: (1) exhaustive Phase-1 treatment, (2) substitution of the drug, (3) careful expurgation of the lingering gingival overgrowth and (4) supportive periodontal treatment

A 45-year-old male patient reported with chief complaint of swelling in the upper front & back gums for four months. History revealed that the patient was diagnosed with hypertension five years back and was taking Amlodipine (Tab Amlod 5mg) since then. He noticed the enlargement of his gums are associated intermittent pain and occasional bleeding.

On general physical examination, the patient was abstemiously built and nurtured. Intraoral examination shown prolix lobulated overgrowth of gingiva in upper jaw (Grade 2: Millers classification of DIGO) comprising all the 3 parts of gingival tissue i.e., interdental papilla, marginal and attached gingiva. Generalised Spontaneous bleeding seen with a Gingival Index score of 3 according to Loe and Silness, Generalised 8mm periodontal pockets seen (Combined pocket) and Generalised Plaque score was 1.7, ought to be Fair according to Silness and Loe.

The case was provisionally diagnosed as chronic generalised non plaque induced gingivitis according to 2017 world workshop guideline for periodontal and peri implant disease classification, drug induced gingival enlargement in relation to 11 to 17.later Patient was advised complete hemogram and all the haematological parameters were found to be within normal range. Upon radiographic examination, Orthopantomogram (OPG) revealed generalized inconsistent bone loss.

Excisional biopsy done irt 14 & 15 due to excessive growth of gingival tissue almost covering the crown at palatal aspect, the biopsy sample was then transferred to a vial containing 10% formalin and sent for histopathological evaluation. Histologic sections of the case, stained with hematoxylin and eosin, were examined by a single pathologist, at the Department of oral & maxillofacial Pathology, Bapuji Dental College & Hospital, Davanagere, Karnataka, India. Histopathological testimony shown combination of condensed and loose fibrous constituent with inflammatory cell infiltration in the connective tissue matrix. On the basis of the patient's history, Histopathological and clinical features, a final clinical diagnosis of AIGO was made (Figure 1 A-C). 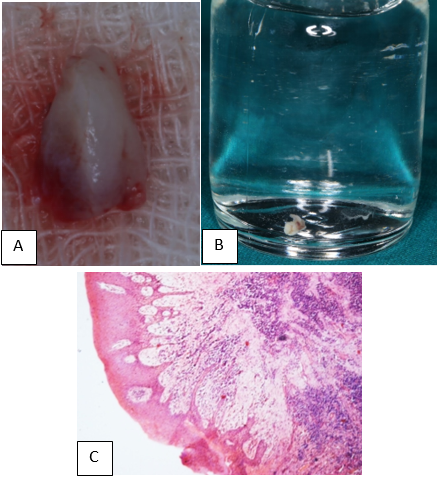 A dramatic response was noticed after 3 months of drug substitution and maintenance of regular oral hygiene (Figure 2 A,B). There was regression in the size of gingival enlargement with minimal of fibrotic component left, along with the improvement in the overall periodontal status by reducing the dimensions of periodontal pockets to ≥6 mm from ≥8 mm. Hence full mouth periodontal open flap debridement was planned to acquire further pocket reduction via Kirkland’s modified flap operation (Figure 3 A-F). 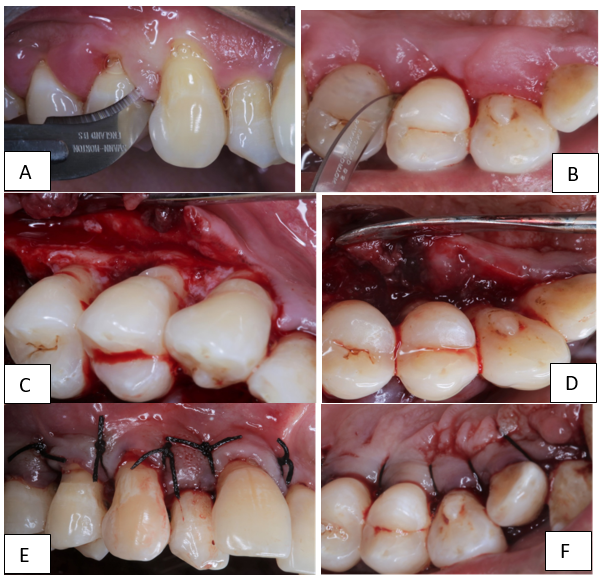 Postoperatively, there was successful elimination of enlarged gingival tissue and restoration of a physiological gingival contour, complete pocket reduction by having probing depth of 4mm at end of 4 months (Figure 4 A,B) & 12 months (Figure 5 A,B) of follow-up period & giving the patient an aesthetically pleasing appearance. 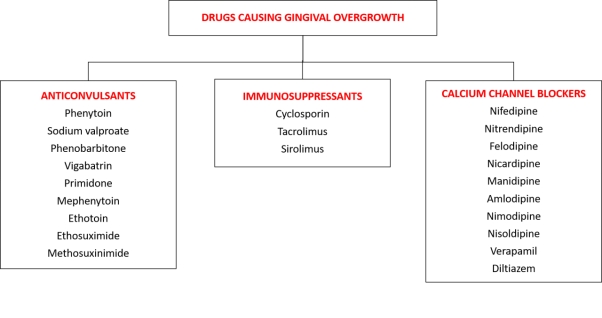 DIGO was, previously known as "gingival hyperplasia" /"gingival enlargement"/"gingival hypertrophy", currently the preferred term is "gingival overgrowth". The above terms do not accurately reflect our current understanding of gingival overgrowth and its histopathology. Generally, DIGO can be alienated into three basic categories based on their causative / drug convoluted in the etiopatology, namely the drugs from anticonvulsants, immunosuppressants and calcium channel blockers.3

Amlodipine is a calcium ion antagonist belongs to third-generation dihydropyridine. Its pharmacodynamics is the same as that of nifedipine,5 but amlodipine has distinctive physio -chemical trait, which is almost completely absorbed in the liver; elevated plasmatic concentration, exorbitant bioavailability, steady biodegradation. Hence it requires only one dose per day to eliminate amlodipine slowly and acts for a long time in Comparision with nifedipine, this in turn leads to better pharmacological effects, higher patient compliance, and fewer serious side effects.5, 6

Compared with patients taking amlodipine, patients taking nifedipine have a higher risk of significant overgrowth. The difference between nifedipine and amlodipine is important because both drugs are dihydropyridone and are therefore similar in structure. In addition, they are all secreted in the gingival crevicular fluid, but their physical & chemical profiles are different. Amlodipine is extra polar than other dihydropyridones with pKa (acid dissociation constant) value of.7, 8 In contrast, nifedipine is highly lipophilic, soluble in cell membranes and penetrates the cytoplasm.9

The diagnosis of DIGO is yet controversial, as the DIGO was placed under the category of “gingivitis dental biofilm induced”,10 because the whole pathoses of DIGO is purely drug influenced rather than biofilm induced and moreover the DIGO always associated with the clinical and radiological features of periodontitis, hence it is suggestive of that DIGO needs an individual category in the classification rather than in gingivitis category.10

Although the mechanism of DIGO is multifactorial, it is believed that drug-cell interactions plays a vital role in the pathogenesis of this effect.7, 8 Clinicians should determine plaque control measures as the main stage of DIGO treatment. While the relationship between DIGO & plaque are still challenging to extricate, and there is evidence that eradicating local factors and upholding good oral hygiene habitually lessens the severity of DIGO through reducing inflammatory constituents. Archetypally, a 3-month interval for periodontal maintenance therapy has been hailed in management of DIGO.8, 9

The choice of treatment for DIGO should be based on the drugs used and the clinical manifestations of the case. First, consider stopping or altering the medicine/drug. Moreover, these conditions ought be scrutinized in consultation with the patient's physician. Modest termination of the aberrant causative agent is generally not a real-world elucidation. Conversely, its auxiliary with alternative medication might be the practical elucidation. The average time taken for the resolution of DIGO is 1 to 8 weeks.8, 9

Contemplation may be set to the usage of alternative course of antihypertensive drugs, which are recognized to be not-concomitant with the DIGO.8, 9 In the current case report, ancillary medicine, that is, Tablet Normadate 100 mg alongside thru Phase-1 therapy occasioned in momentous clinical improvement in 6 weeks of time.

The necessity and timing of surgery must be carefully considered. Surgery is usually performed for cosmetic/aesthetic reasons before any functional consequences occur. The classic surgical method is gingivectomy with an external bevel. However, Mavrogiannis M et al.,11 concluded in his study that open flap debridement and conventional gingivectomy delivered similar effects with reverence to the degree of reappearance of DIGO. In the present case, as the overgrowth of the gingiva was clinically associated with the true periodontal pockets, open flap debridement was performed. The postoperative results were very satisfactory in terms of aesthetics and functions.9

Even low-dose amlodipine (5 mg/day) can induce DIGO. Physicians and dentists/periodontists should pay attention to the patients consuming amlodipine group of drugs that can induce DIGO to detect oral changes to successfully prevent, diagnose and control their adverse side effects. However, in order to attain the best results, we requisite to adopt multi and inter disciplinary team methodology with cardiologist.

S Jepsen JG Caton JM Albandar Periodontal manifestations of systemic diseases and developmental and acquired conditions: Consensus report of workgroup 3 of the 2017 World Workshop on the Classification of Periodontal and Peri-Implant Diseases and ConditionsJ Clin Periodontol20184521929