The deceptive histomorphology of DGCT – A case report

Dentinogenic ghost cell tumors (DGCTs) are uncommon neoplasms classified as a solid variant of the calcifying odontogenic cyst and defined as a locally invasive neoplasm, characterized histologically by an ameloblastomatous epithelium with an area of ghost cell formation and a varying amount of dentinoid. Herein, we present the case of a 22-year old man who was referred to us due to recurrent swelling of right posterior mandibular region. The diagnosis of a DGCT was made by the use of advanced radiographic imaging and detailed histopathological examination.

Calcifying odontogenic cyst (COC) was first described as a distinct pathology by Gorlin et al. in 1962.1 Two organizing principles of classification of COCs have been put forward: monistic and dualistic.  The dualistic concept, proposes that COCs contain two different entities, a cyst and a neoplasm.2 The cystic lesions are termed as “calcifying cystic odontogenic tumors” and the neoplastic entity as a “Dentinogenic ghost cell tumor” (DGCT).3 DGCT is a benign but locally infiltrating neoplasm of odontogenic epithelium. According to the classification of odontogenic tumors and cysts given by WHO in 2017, DGCT has been described under mixed (epithelial and mesenchymal) origin tumors.4 The aim of this case report is to present an extremely rare case of intraosseous DGCT in 22 year old male patient.

A 22-year-old male reported to our institution referred by a private practitioner for the management of swelling in relation to his right lower posterior jaw region. History revealed that the swelling was present since 1 year for which he had approached a private clinic and had undergone extraction of right lower back tooth before 8 months even after which the swelling did not subside. Then patient was subjected to radiographic investigation, orthopantomograph (OPG) which revealed a single unilocular radiolucency with well-defined sclerotic border of size 5×4 cm extending from mesial root of 46 to 1cm distal to distal root of 48. Evidence of radiographically missing 47, knife edge root resorption in distal root of 46 & 48. Downward displacement of right inferior alveolar nerve canal with thinning and bulging of right inferior border of mandible was noticed (Figure 1). Followed which extraction of 46 & 48 was done, along with that incisional biopsy was performed and was histopathologically diagnosed as Ameloblastoma with squamous metaplasia. With this report patient approached our institute for further opinion and management. 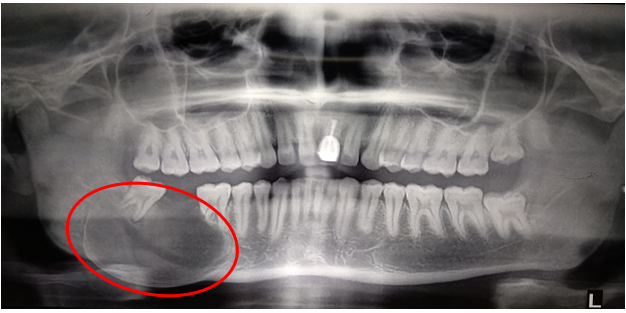 Extra oral examination revealed a mild diffuse swelling present in right side lower third of face extending superiorly in line with right ala of nose, inferiorly to right inferior border of mandible, anteriorly in line with outer canthus of eye and posteriorly to the angle of mandible (Figure 2). On palpation it was soft, mildly tender, non-reducible and non-compressible. Two right submandibular lymph nodes was palpable of size approximately 0.5×0.5 cm, tender and mobile. Intra oral examination revealed unhealed extraction sockets in relation to 46, 47 & 48 (Figure 3). It was tender and bony hard in consistency. 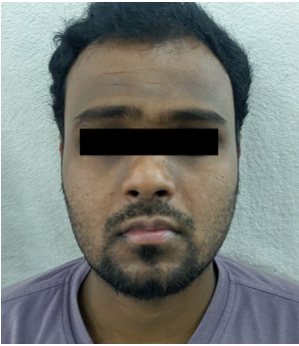 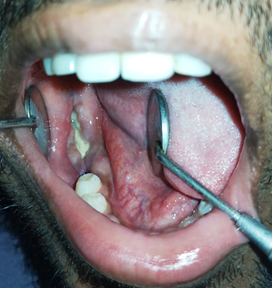 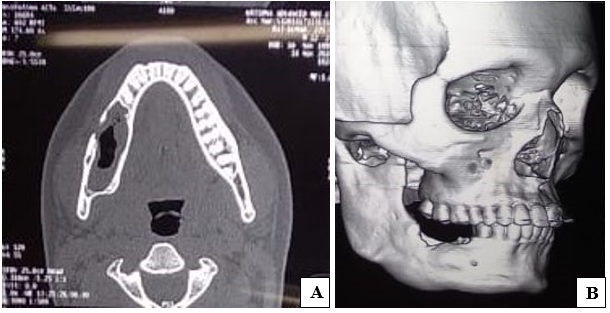 Histopathological examination of incisional biopsy tissue revealed plexiform network of odontogenic epithelium, spreading throughout the connective tissue. In the network of odontogenic epithelium, the central areas shows stellate type of cells and only few areas of peripheral cells showed parallely arranged columnar cells simulating ameloblast like cells however without reverse polarity. There were some hyalinised areas noticed in some part of epithelium. The stromal component showed pale eosinophilic material (Figure 5). Based on clinical, radiological and histopathological features, the lesion was diagnosed as Plexiform type of Ameloblastoma.

Histopathological (incisional) photomicrograph showing: (A): Plexiform network of odontogenic epithelium with central areas of stellate type of cells and peripheral cells simulating ameloblast like cells (B): Hyalinised eosinophilic areas noticed in some part of epithelium 40x

En bloc resection of the mandible was performed based on suspected preoperative diagnosis of ameloblastoma and the pathological tissue was sent for histopathological diagnosis. The histopathological examination revealed odontogenic epithelium of variable thickness, some part of epithelium showed well-formed keratin and flattened in nature. In hyperplastic area, basal columnar cells are noticed with supra basal layer showing loosened arrangement. Above that there is dyskeratotic round to polygonal cells with the surface showing globular eosinophilic masses containing plenty of ghost cells (Figure 6). On examination of basal part of lining epithelium, some areas showed network of epithelial proliferation with sub epithelial hyalinization suggestive of dentinoid. Occasional areas showed calcification (Figure 7). Based on the histopathological findings, a final diagnosis of a neoplastic variant of COC - Dentinogenic ghost cell tumor (DGCT) was given.

COC constitutes 1% to 2% of all odontogenic tumors in which 88.5% are cystic and the remaining 11.5% are solid tumors.5 DGCT is extremely rare solid, neoplastic variant of COC, with about 60 cases described in the literature.6 It can be central/intraosseous or peripheral/extraosseous. The central DGCT having a more aggressive behavior.7 The average age for the presentation of this lesion is 50 years (range: 17–72 years), with slight male predilection.8 The frequently affected sites are posterior maxilla and mandible with a slight predilection for mandible. Patients are usually asymptomatic, although with a few complaints of pain or discomfort.9 The present case was central tumor subtype affecting the posterior region of mandible in 22-year-old male patient, which is at a comparatively younger age than the average age.

Amounting to the presence and extent of calcification, DGCT may appear radiographically as radiolucent, radiopaque or mixed lesion. Majority of cases are unilocular but multilocular lesions may be observed. These tumors are typically well defined, often expansile and may result in resorption and divergence of roots of adjacent teeth.2 The present case was unilocular radiolucent lesion with well-defined borders. Thinning of inferior border of mandible and downward displacement of inferior alveolar nerve canal suggested the aggressive nature of the tumor.

Histologically, DGCTs are composed primarily of ameloblastoma-like areas and odontogenic epithelial islands with varying amounts of ghost cells showing keratinization and calcification. The most important histologic feature of DGCT that distinguishes it from conventional ameloblastoma and other odontogenic tumors is the presence of ghost cells and dentinoid substances.

In this case en bloc resection was performed, based on the suspected preoperative diagnosis of ameloblastoma. Kasahara et al. recommended treating DGCT as ameloblastoma and suggested that conservative treatment protocols (curettage or/and enucleation) were not suitable options for the treatment of DGCT.10 Although based on a limited number of cases, this approach also seems to be appropriate for DGCT, due to a high rate of local recurrences. In cases where conservative surgery was performed a recurrence rate of 73%(after a follow-up period of 1–20 years) is reported, while in cases treated with more radical surgery the recurrence rate, although still noticeable, is reduced to 33%.8

In order to bring focus and provide more information about this rare entity, we present a case report of a central DGCT in a 22-year-old patient. Due to its rarity and scarcity of published information, increased clinical awareness is essential in order to gather more data and eventually be able to optimize the approach of these patients.