A large radiolucent lesion in anterior maxilla: A case report

Cystic lesions of the jaw are a common occurrence. We present a case of a large unilocular cystic lesion in maxilla associated with an impacted tooth, impinging on the nasal floor. The uniqueness of the case is the high probability of a dual pathology; a cystic pathology associated with the impacted tooth (likely dentigerous cyst) and a large radicular cyst involving the apices of teeth from 21 to 26. The patient presented with a rare finding of a palatal swelling rather than a buccal swelling associated with cystic lesions involving maxillary posterior teeth. Enucleation of the cyst and extraction of the impacted tooth were performed, no other teeth were extracted. The report describes the treatment and follow up of the patient.

The radicular cyst is the most common inflammatory cyst in the jaw that is of odontogenic origin. Though periapical cysts are mostly encountered in the young adults, they can still affect people over a wide age range, being more often witnessed in the males during the third and fifth decades of their life.1, 2, 3, 4 The deciduous teeth are rarely involved and it is quite uncommon for these cysts to develop in relation to the deciduous teeth.5, 6 Regarding the location of the periapical cysts, these are most frequently located in the anterior maxillary area with lateral incisor teeth being more commonly involved. However, exception is seen in relation to the deciduous teeth, here, these cysts are located more often in the mandible region than in the anterior maxillary region. The patients affected with these cysts can present with previous or ongoing symptoms of pain, tenderness, swelling or drainage in the involved area due to the association of these cystic lesions with the non vital tooth. However, in some situations, these cysts are recognized only during routine radiographic examination, since the affected patients remain asymptomatic and show no symptoms of the lesion.1, 7 With respect to the management of the cystic lesions, these can be treated with a simple conventional therapy or at times may require a surgical intervention depending upon the size of the lesion.8

A 24-year old male patient presented to our clinic with the chief complaint of pain and swelling in the upper front and left back region tooth for 6 months. The patient also complains of decayed and painful tooth in left back region. His past medical history was non-contributory.

Intraoral examination revealed proximally carious left maxillary 1st molar. The tooth 21,22,23,24,25,26 showed signs of grade 1 mobility and 1st molar was tender to pressure and percussion. 11 was missing Soft tissue examination revealed vestibular obliteration in left maxillary region and a swelling of almost 2.5x2.5 cm in dimensions present palatally, which was soft and tender on palpation (Figure 1). Fluctuation could be elicited in the swelling. Loss of buccal cortical wall was evident during examination. The patient did not report any discharge from the swelling. Paresthesia was noted in region of infra orbital nerve.

The patient was advised for panoramic radiograph and cone beam computed tomography for radiological evaluation.

No radiographic evidence of root resorption of adjacent teeth or any other pathology noted.

Following all aseptic precautions the patient was prepared for surgery. Bilateral infra orbital, nasopalatine, greater palatine and left posterior superior alveolar blocks were used to achieve anesthesia. The surgical site was infiltrated with 2% lignocaine with 1:200000 adrenaline to achieve hemostasis and create a plane of dissection. Cyst was exposed following elevation of a muco-periosteal flap extending from 12 to 26, along with a palatal flap (Figure 4). Nasal mucosa was elevated and secured by placing a fine blade retractor. Cyst enucleation was done using blunt and sharp dissection followed by extraction of impacted tooth. Cavity was thoroughly irrigated and debrided. As noted on the CBCT, there was thinning of the nasal floor but no perforation was seen. The nasal floor was also pushed upwards due to expansion of the cyst. Iodoform gauze was placed in the cavity. Wound was closed using 3-0 silk sutures. A palatal plate was given post operatively to support the palatal tissue and maintain pressure on the operative site. Pack was removed after 72 hours. The healing was uneventful. Mild swelling and pain were noted in the immediate post operative period which subsided subsequently. Paresthesia recovered over a period of 3 months. The specimen was sent for histopathological examination, which revealed a radicular cyst. As the cystic lining on the impacted tooth could not excised along with the tooth, diagnosis of a dentigerous cyst associated with impacted tooth could not be made. However, we still can’t rule out the possibility of a dual pathology in this case. 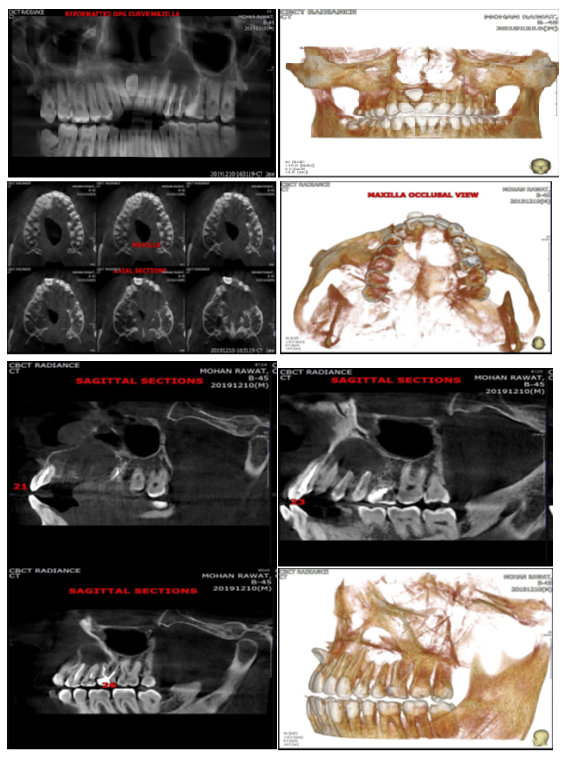 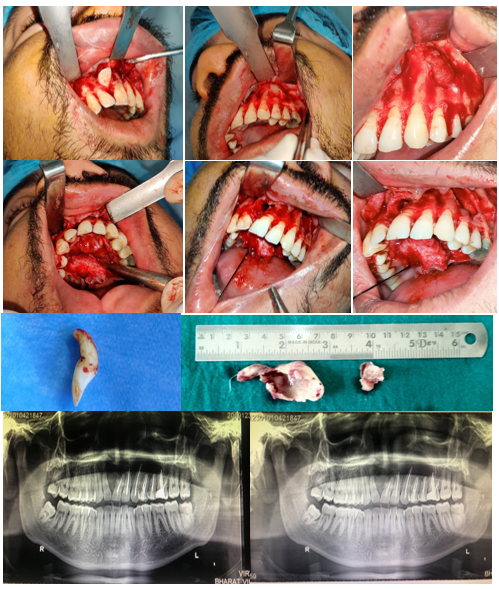 Histopathological examination revealed a lining of stratified squamous epithelium with surface keratizination and palisading of the basal cell nuclei. The subepithelium show fibrocollagenic tissue with focal dense chronic inflammatory cell infiltrate composed of plasma cells, lymphocytes and macrophages, no evidence of malignancy in the sections examined. The histopathological findings confirmed the diagnosis of radicular cyst.

Based on the size and location of the periapical cysts, these lesions can be treated with various procedures, for example, endodontic therapy, extraction, surgical interventions such as enucleation and marsupialization.9, 4 However, considering the possibility of the malignant transformation of the lining epithelial cells as was observed in around 3.4% of the studied cases, these cystic lesions can still present with a poor prognosis. And such malignant transformation was most commonly seen in the cysts that involved the maxillary region.10 Thus, immediate management of these cysts is necessary to prevent any further complications. Therefore, taking into account all the factors, our choice of treatment for the above mentioned case was surgical enucleation and curettage.9

In the above case, the radiological findings were suggestive of extensive bone involvement in the maxillary region and the lesion presented as a unilocular cyst with well-defined radiolucencies. The other key features of this case was the presence of a retained permanent incisor and a large swelling involving the buccal and palatal aspect of the maxilla along with the large bony lesions. With consideration to the diagnosis, the differential diagnosis included all the cysts of the jaws and also the tumours from both the odontogenic as well as non odontogenic origin. Therefore, a definitve diagnosis could only be decided after a histopathological examination and a final diagnosis cannot be based just upon the patient’s history, clinical and radiological evaluation. Based on the above, this particular case reflects on the significance of a preoperative radiographic evaluation in assessing the correlation between the lesion, nasal and maxillary cavity, and the teeth. Moreover, this radiographic information provides the guidance for delineating the exact extent of the lesion and also proves to be valuable in selecting the type of treatment required for the comprehensive management of the periapical cysts.

CR Stockdale NP Chandler The nature of the periapical lesion: A review of 1108 casesJ Dent1988161239