Dog bite of the orofacial region- Case series and update

Animal bites are a significant cause of morbidity and mortality across the globe and when involving the orofacial region, they commonly present to dental surgeons. Literature on their initial management provides a plethora of conflicting views and results and it is necessary to be up to date with the latest modalities of management of such facial injuries to give best functional and surgical outcomes to the patients. Antibiotics and anti-tetanus and anti-rabies vaccinations and immunoglobulins should be judiciously administered along with appropriate wound management.

Animal bites pose a major public health problem in children and adults worldwide. Animal bites are a significant cause of morbidity and mortality across the globe.1 Numerous animal species including snakes, dogs, cats and monkeys have high potential to bite humans.2, 3 Worldwide statistics report that about five million people are bitten by snakes every year (majority being in Africa and South-East Asia) whereas dog bites account for almost ten million injuries annually; the highest risk being amongst children.4, 5 The health impact of animal bites are dependent on the type and health of the animal species, the size and health of the person bitten, and their accessibility to appropriate health care.

Although there is a lack of published epidemiological data across the globe, few established facts are that children between 5 to 9 years are at most risk of dog bites compared to adult5, 6 and more prevalent among males than females.7 Being the most exposed part of the body, the face is particularly vulnerable to such injuries.8 Rabies is a significant health concern following animal bites.2, 5

The types of wounds encountered range from insignificant scratches to life-threatening neck and facial injuries. The tissue defects may be superficial, but they can even cause amputations, including severe vascular and nerve or bony destruction.9

The available literature on their initial management provides a plethora of conflicting views and results. In particular, the role of prophylactic antibiotics and primary wound closure remains controversial.10 We hereby present few cases of facial dog bites and their management.

An 11-year-old child reported to the causality department with a chief complaint of bite on the right side of face involving upper lip. He was found to have no relevant medical history and allergies. The vital signs were within normal range. A deep laceration wound was present extending from the right side of upper lip extending upto philtrum (Figure 1). Intraoral examination revealed slightly extruded and mobile maxillary right deciduous central incisors. No bony fractures were detected. 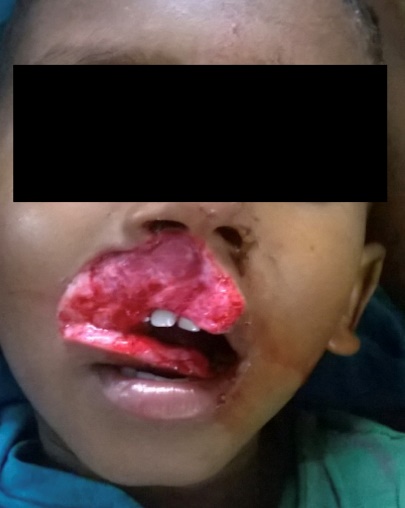 Because of the patient’s young age, the injuries were conveniently managed under local anaesthesia after written informed consent of the parents. After proper facial disinfection and preparation of the operative field the soft-tissue wounds were thoroughly debrided. Irrigation was done with normal saline and hydrogen peroxide (4:1) followed by normal saline. Prompt and combined post-exposure prophylaxis (PEP) was initiated.

20 IU/ kg for Human Rabies Immunoglobulin (HRIG) into and around the wound was given and primary closure were immediately meticulously accomplished (within two hours) using double layered suturing. The deep layer was sutured using 3-0 vicryl suture material and superficial suturing with 4-0 RC silk suture material. The luxated maxillary incisors were extracted. Patient was given antibiotics and analgesics for 5 days.

The 2-site intradermal method was used (2-2-2-0-2). One dose of vaccine PCECV (Rabipur TM), 0.1 ml was given intradermally at two different lymphatic drainage sites: deltoid muscle on the left and right upper arm and suprascapular area on days 0, 3, 7 and 28. Injection tetanus toxoid was also given. Tetanus and rabies prophylaxis were evaluated on each recall visit. Regular follow up did not reveal any sign of infection. The child was reviewed on and sutures were removed on 5th day (Figure 2). The patient was kept on regular follow-up for 6 months was found to be asymptomatic.

Follow-up picture after removal of sutures 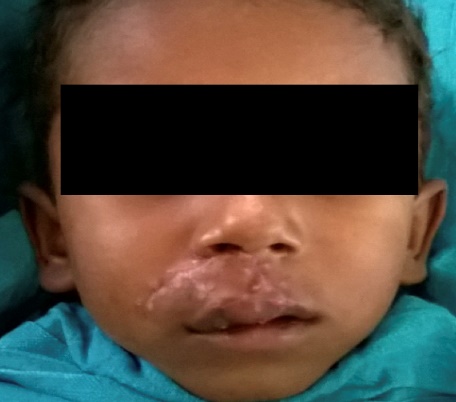 A 15-year-old child reported to the Trauma and Emergency department with a chief complaint of animal bite seven days back. No significant medical history was reported. The vital signs were within the normal range. A deep laceration wound was present on the left side involving chin and extending up to mental protuberance (Figure 3 a). No dental or bony fractures were detected. Strict aseptic protocol was followed and thorough debridement and irrigation of wound with normal saline and hydrogen peroxide followed by normal saline was done under local anaesthesia. Prompt and combined post-exposure prophylaxis (PEP) was initiated. 20 IU/ kg for Human Rabies Immunoglobulin (HRIG) into and around the wound was given and single layer suturing was accomplished under meticulous care using 4-0 reverse cutting prolene suture material (Figure 3b).

The 2-site intradermal method was used (2-2-2-0-2). One dose of vaccine PCECV (Rabipur TM), 0.1 ml was given intradermally at two different lymphatic drainage sites: deltoid muscle on the left and right upper arm and suprascapular area and was given on days 7 and 28.

Injection tetanus toxoid was also administered. Patient was under antibiotics and analgesics cover for 5 days. Follow up of the patient did not reveal any sign of infection. The parents were informed about the postoperative wound management. The patient was kept on regular follow-up for 6 months.

Bite wounds hold an important position in traumatology due to their high complication rate as compared to similar other soft tissue wounds.11 The mammalian bite injuries accounts for 10% of soft tissue injuries to the orofacial region with dogs being the most common perpetrators.

A person bending over or putting face close to a dog's face or gazing between the human and dog has been said too closely precede a dog bite to the face and are responsible for the increased incidence of dog bites. Maximum bites are directed towards the central area of the victim's face (nose, lips) and more than two thirds of the victims are children,12 as is evident from our patients as well.

Since they involve the orofacial region, dog bite wounds commonly present to oral and dental surgeons and thus awareness about latest modalities of management of these is a must.

Categories of dog bite wounds are as follows (Table 1)

Due to the presence of a wide range of microflora in the oral cavity, animal bite wounds are generally contaminated, and their treatment becomes difficult because of the increased risk of infection, especially in severe injuries.13

In the treatment of animal bite wounds on the orofacial region, it is important to avoid infection and to achieve aesthetically acceptable results.14 When injuries are extensive, anti-infective measures such as local wound debridement or open-postoperative wound management are often debatable with the demand for a perfect late aesthetic result. Although most authors regard intensive wound irrigation with adequate pressure to be absolutely necessary, controversy continues to center on the timing of wound debridement and primary wound closure, as well as on the use of antibiotic prophylaxis and primary plastic reconstruction.15

The timing of optimal management of these wounds is crucial for better outcomes. In the past, accepted surgical practice involved delayed closure or healing by secondary intention. It was thought that because of the risk of infection, dog bite injuries should not be closed primarily.16 Traditional treatment involves initial surgical exploration, followed by daily dressing with hydrogen peroxide and secondary repair 2 to 7 days later depending on the severity of the injury.17

The management of dog bite injuries has evolved over the years. More recently, there has been a move to more early and definitive treatment, with early washout and debridement of wounds and primary closure like in our cases.7, 18 A relationship has been established between the infection rate, the time of first medical treatment, wound location, type of animal, and several patient-dependent factors. A higher infection rate has been reported when the initial medical treatment was started more than 2.5 hours after the accident, or in patients with advanced age, immunosuppression, alcoholism, or diabetic peripheral occlusive disease.18

Most patients receiving delayed initial treatment show more clinical signs of infection as compared to those receiving immediate care. Also, the extent of facial wounds does not seem to have a direct effect on the infection rate in their population.13

Debridement should be considered in dirty wounds and has been shown to be effective in preventing infection. Surgical debridement is suggested for the wound edges and nonviable tissue, using sharp debridement. Most bite wounds can be treated in the Emergency department. The essentials of treatment include the history, inspection, irrigation, debridement, and if indicated, closure.15 The wound should be carefully inspected to identify any deeper injuries or devitalised tissue. Anaesthesia is usually necessary; otherwise, an adequate inspection is nearly impossible. Care should be taken to visualise the bottom of the wound and, if applicable, to examine the wound through a range of motion. Irrigation is one of the most important means of infection prevention. The bite wound should be rinsed and covered with a sterile dressing. Large dirty wounds may require irrigation in the operating room. Isotonic sodium chloride solution is a safe, effective, inexpensive, and easily available irrigating solution.19

In our cases thorough cleansing of the wounds prior to surgery was accomplished with copious amounts of saline solution and hydrogen peroxide using a jet spray. Intermittent pressure irrigation of wounds diminishes the bacterial count considerably and enhances the healing properties of the tissues and the wounds sutured primarily when feasible.20

Thus, although traditionally suggested to leave these wounds open because of the proposed increased risk of wound infection when sutured,15 newer reports indicate suturing of animal wounds does not increase the incidence of infection. For all animal bite wounds, tetanus and rabies prophylaxis should be administered. Fresh bite wounds warrant other laboratory tests depending on the wound and patient’s condition like complete blood counts and local/blood cultures. The appropriate use of antibiotics should also be done.

Animal bites with tissue loss often lead to severe adverse physical and psychological impact. Inability to address and correct the deformities immediately further aggravates the suffering. With the advent of better surgical techniques and equipment, improved spectrum of antibiotics and newer monitoring facilities, even reconstructing animal bites primarily needs to be considered.21

The risk of infection of facial wounds generally cannot be reliably predicted from the wound type. The factors such as the wound stage, the time of initial treatment, the animal type, and other patient-dependent factors (diabetes, immunosuppression) should also be taken into consideration at the time of treatment planning.

In the case of facial wounds, primary, tension-free wound closure is recommended along with antibiotic prophylaxis. Localised infiltration of rabies immunoglobulins improves wound outcomes and administration systemic of Rabies and Tetanus prophylaxis is a must. It is crucial to remember that facial trauma has to be assessed and taken care as soon as possible, within the first hours after the trauma as it increases the chances of obtaining a better aesthetic as physiologic result for the patient, also preventing infections from the wound and external environment. Also, in the case of animal bites, it is important that the professional possess the knowledge to deal with each individual situation, employing the correct prophylactic vaccine and perform the correct notification.22

Written informed consent was obtained from the patient parents prior to the investigations and treatment. The same was also procured for publication of this case report and any accompanying images.

The authors have not been influenced by any financial or personal relationship with people or organisations in preparation of this study.

N Akhtar MJ Smith S Mckirdy RE Page Surgical delay in the management of dog bite injuries in children, does it increase the risk of infection?J Plast Reconstr Aesthet Surg200659180510.1016/j.bjps.2005.05.005

MA Chaudhry AF Macnamara S Clark Is the management of dog bite wounds evidence based? A postal survey and review of the literatureEur J Emerg Med20041163137