Platelet analogues (PA; platelet rich plasma and platelet rich fibrin) are autologous bioactive compounds that have a wide range of medical and dental applications, including periodontal, maxillofacial, Plastic surgery and sports medicine. The aim of these technologies is to collect all the constituents of a patient's blood sample so that they can be used to promote tissue regeneration and improve healing. Since 1954, PA has come a long way. Periodontology and implant dentistry have both benefited from the use of PAs. However, the non-standard preparation technique, processing time, transfer of concentrates, centrifugation temperature, vibration, etc. are all variables that contribute to the various results described in the literature. This study will retrace the evolution of PAs, their preparation procedures, their clinical and technological characteristics and their uses.

Periodontitis is progressive inflammatory disease that cause loss of support for the affected teeth, especially the fibers of the periodontal ligament and the bone in which they are placed. The expected curative effect of periodontal treatment is regeneration or repair. This is determined by two critical events: the availability of the required cell types and the presence or absence of the appropriate signals to attract and activate cells. The development of the clot initiates the healing cascade of any wound, which is then followed by the phases of proliferation and maturation. Growth factors promote wound healing by promoting cell proliferation (biogenesis), cell migration (chemotaxis) and the creation of new blood vessels (angiogenesis).1 The use of blood-derived products for the treatment of wounds began in 1970 with the introduction of fibrin glues, produced by the polymerization of fibrinogen with thrombi and calcium.2, 3 Fibrin glue has therapeutic uses such as topical hemostasis and sealing of tissue, soft tissue, and fusion agents for bone particle replacements.4, 5 It has a diameter of 2-3 µm and the cell organelles consist of granules, a few mitochondria and obvious membrane features. It features a surface-connected canalicular system and a well-stacked tubular system that aids in the expulsion of growth factors, especially PDGF, when platelets are activated (Figure 1).,6 Granules are round or oval membrane entities that contain cytoplasm. The diameters of the granules vary between 200 and 500 nm. These macromolecules represent 15% of the total volume of platelets7 and serve as a benchmark for proteins involved in various stages of wound healing, including PDGF, TGF and insulin-like growth factor (IGFI).8 Along with TGF, PDGF stimulates protein synthesis in bone tissue and the proliferative stage of wound healing. TGF stimulates osteoblast and endothelial cells while inhibiting osteoclasts and initiating the growth of intertwined bones. IGF1 promotes the proliferation of osteoblasts and enhances the expression of osteocalcin for matrix formation. A combination of IGF1 and PDGF assesses the rate and quality of wound healing (Figure 2).9 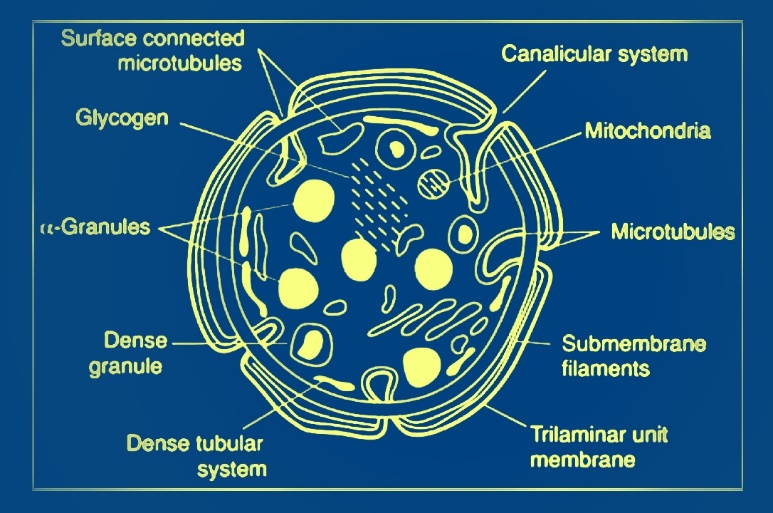 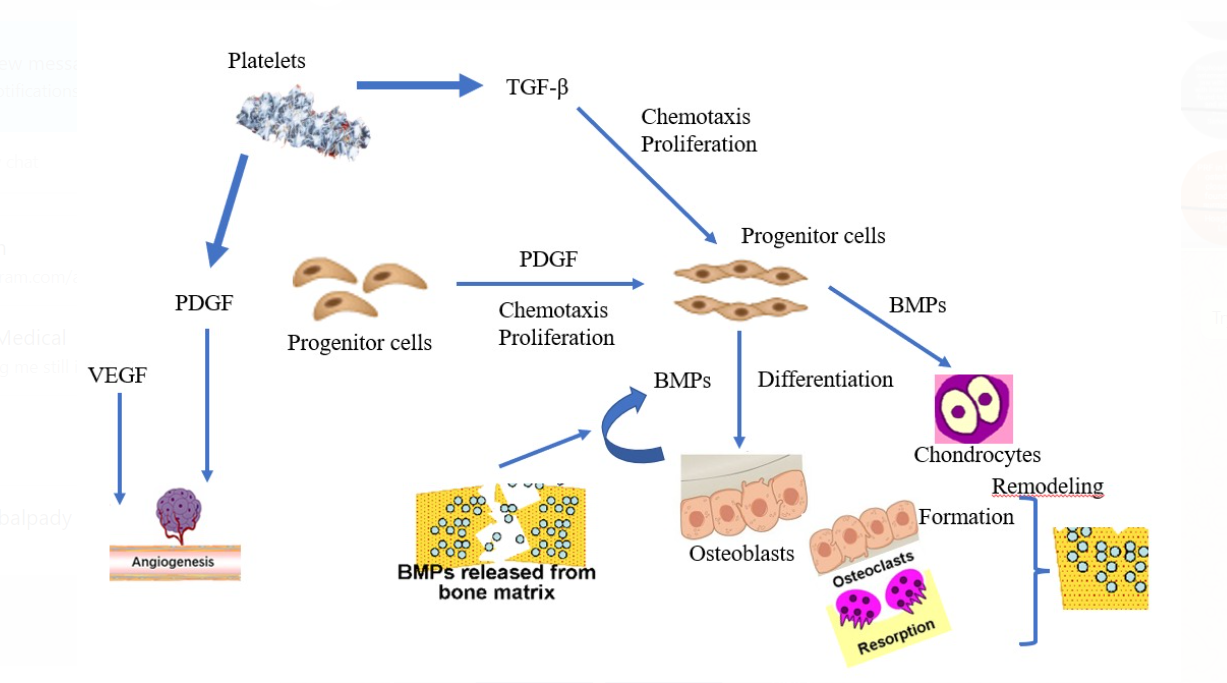 The granules merge with the cell membrane following activation. When activated, the proteins are released, attach to the target cells' transmembrane receptors, activate intracellular signal proteins, and affect the expression of a gene sequence, encouraging healing. 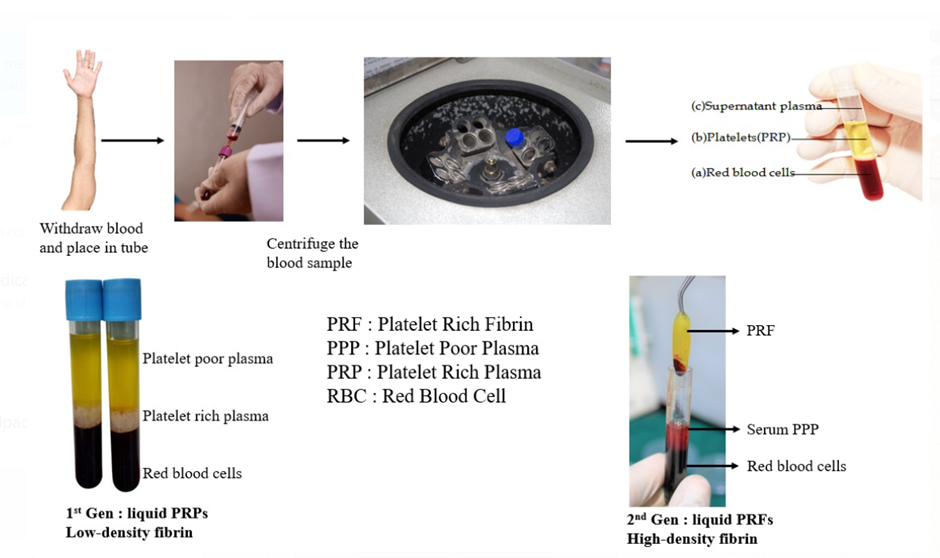 It is a first-generation platelet concentrate with a high platelet concentration but a low quantity of natural fibrinogen. Within 3–5 days following platelet activation, the granules release growth factors that continue to stimulate the proliferative phase for 10 days.

Each combination contains 7 mL PRP, 1 mL CaCl2, 1000 units of topical bovine thrombin, and 1 mL air (the CaCl2 and thrombin initiate the coagulation process and easy handling). It is then agitated for 6–10 seconds to promote clotting before being applied to the graft site or mixed with particle graft. It can also be gelled and applied to a surgical site as a membrane.

The following are some of the benefits of utilising PRP: delivers cytokines and growth factors to the region, which aids in fast regeneration in a way that fibrin glue would not because of the presence of platelets; free of worries about transmissible illness; and convenient for the patient.

However, its drawbacks include a lack of uniformity in the PRP preparation procedure, variations in the storage period of various platelet concentrations, and the risk of life-threatening coagulopathies (bovine thrombin can trigger antibodies to clotting factors).

In the intervening time, Kotsovilis et al.12 observed varying results regarding the effectiveness of PRP with various therapeutic bioactive agents/procedures, potentially implying that the precise selection of agents/procedures combined with PRP is crucial. According to Bae et al.,13 there is enough data to justify the use of PRP for bone growth on a sinus bone transplant, although its influence on implant longevity is less substantial.

It is a kind of fibrin that is rich in platelets. Choukroun et al.14 (2001) created an autogenous live biomaterial that is a second-generation platelet concentrate in France. It has grown in popularity due to its ability to speed up soft- and hard-tissue recovery. Its advantages of PRP include simplicity of preparation/application, low cost, and the absence of biochemical alteration (no bovine thrombin or anticoagulant is required).14 The fact that PRF has a straightforward preparation process is a significant benefit. The difference between a natural blood clot and a PRF is that the latter is more homogenous and stable, as well as easier to handle and install.15

The technique attempts to collect platelets and the cytokines produced in a fibrin clot.16 Only centrifuged blood, free of anticoagulants and bovine thrombin, is required for the production of PRF. Blood samples are collected in 10-mL glass or glass-coated plastic tubes without anticoagulant and promptly centrifuged at 3000 rpm for 10 minutes.17 The end result has three layers: The top layer is an acellular plasma, followed by a PRF clot in the centre and a red corpuscle base at the bottom (Figure 4).18 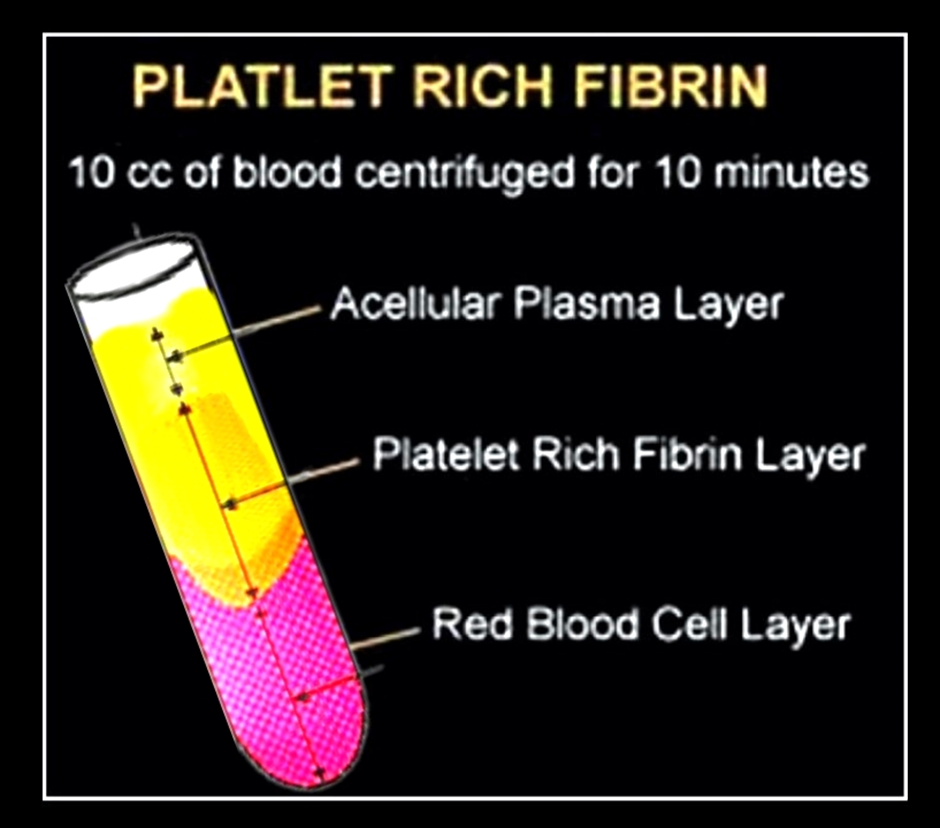 Mazor et al.8 proposed that clots might be converted into membranes by compressing them between two sterile gauzes or in a specialised PRF instrument. When blood comes into touch with a silica surface, the clot polymerization process is activated; this activation decreases the

When compared to the use of bovine thrombin for PRP preparation, there is a higher risk of cytotoxicity.19 In comparison to PRP, it has equilateral connections (connected trimolecular), a thin and flexible fibrin network, and cytokines enmeshment and cellular mobility. The three-dimensional structure of the PRF membrane provides its elasticity, flexibility, and strength.20

The advantages of PRF as a bioactive substitute include less technical skills, minimal biochemical change, cost effectiveness, better integration of circulating cytokines in fibrin meshes, and delayed polymerization, which speeds up healing and enhances structural integrity.21

PRF's stated restrictions include its limited quantity and the necessity for immediate use after preparation since shrinkage due to dehydration may result in structural integrity loss. 19The presence of leukocytes alters the biologic properties of the material, and bacterial contamination occurs during storage.22 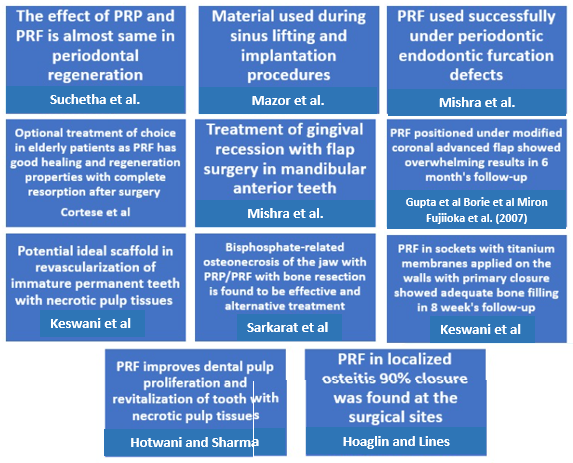 According to the literature, some other possible applications of osteitis reduction have been discovered in surgical sites of third molars,25 as an adjunct to wound healing of the donor site of free gingival graft,26 in pulp revascularization procedures of immature permanent teeth, and reconstruction after cancer surgery.27 For larger operations, specialised multiple centrifuge tubes can be utilised to produce large amounts of L-PRF.28

The new enhanced PRF generates more growth factor, resulting in the buildup of large quantities of proteins over time.29 According to Gassling et al.,28 PRF appears to be more effective than collagen as a scaffold for cell proliferation, and PRF membranes can be utilised for in vitro growth of periosteal cells for bone tissue engineering.30

PRF, a new type of platelet concentrate, is a game-changing move in regenerative periodontal treatment that requires no metabolic changes and is processed fast. PRF has been used in a number of medical fields, including orthopaedics, plastic surgery, and dentistry. Despite the fact that multiple systematic reviews and meta-analyses have confirmed the advantages and downsides of PRF, additional prospective studies have to be conducted. Clinical trials in cooperative PRF for various treatments are encouraging; nevertheless, further research is needed to enable its broad use in routine dentistry practise with high clinical efficacy and long-term stability.