Introduction: Identification of a person is of paramount importance in a medico-legal investigation. At present more and more people use protecting lipsticks and permanent lipsticks. With these lipsticks a latent lip print is generated by contact with a surface and, like with the latent fingerprints occur, this latent lip print can be developed.

Aims: This study aims to retrieve latent lip prints from various inanimate surfaces like thermocoal plate, bone china, and glass to compare the efficacy of developers i.e., fingerprint powder, Sudan III, Vermillion, and its comparison with standard lipstick prints. Current research assesses the effectiveness of particular surfaces in the retrieval of lip print in personnel identification.

Materials and Methods: This study included a total of 30 subjects. Latent lip print was developed on the different inanimate surfaces by pressing the lips against the different vehicles. After collecting samples, a camel hair brush was used to retrieve all three chemicals individually by simply tapping on all three surfaces. Application of chemicals was continued until the print became clearly visible for the study. Developed latent lip print was then compared with the visible lip print. Subsequently, a standard lipstick print was developed from the same subject. All the samples were coded and graded according to the patterns suggested in the literature.

Conclusions: The study found Fingerprint powder the best developer and Thermocol plate the best surface. The findings of this study may be beneficial for investigators.

The identity of an individual is a distinctive tool that is unique to every individual. It is an important aspect in cases of theft, criminal investigations, and mass disasters. Fingerprints, DNA, and Retina patterns have been using for a long time in the identification of a person.1, 2 With the advancement in technology many innovations have come across in the field of forensic science. However, there are many well-known implanted methods like DNA comparisons and Dental fingerprints of human identification, one of the most remarkable emerging methods of human identification is human lips recognition. The peripheral surface of the lip has many elevations and depressions forming a characteristic pattern called lip prints, which are unique to an individual.2, 3

Lip prints affect the characteristics found on one's lips. Identifying a selected person to those characteristics (lip prints) is mentioned as Cheiloscopy. Cheiloscopy is a forensic investigation tool that deals with the identification of humans with the help of lip traces which can be found on any inanimate surfaces. The various patterns present of wrinkles or furrows or grooves present on the lips have distinct characteristics to every single individual like fingerprints. At this time more and more people (women) use protecting lipsticks and permanent lipsticks. Through these lipsticks, a latent lip print can be generated by contact with a surface.3, 4

Based upon the research done by Suzuki and Tsuchihashi (1968 – 71), it was established that the arrangement of lines on the red part of human lips is individual and unique for each human being. This statement led to the conclusion that there is a possibility of using the arrangement of furrows on lips for the identification of a person.4

The Lip Prints being uniform and do not change during the life of a person so; these characteristics and unique patterns of an individual can be used as an identification marker at the crime scene. Lip Prints obtained from non-lipstick coated lips are considered latent prints. The latent lip prints are considered as an important tool in criminal identification. These latent lip prints could be developed successfully for study purposes using various dyes.5

The objective of the study was to compare the development of lip prints on the various inanimate surfaces (transparent glass, thermocol cups, and bone china) after different dwell times from the time of taking of impressions. Furthermore, the study aimed to investigate that which developing powder, namely fingerprint black powder, Sudan III-lysochrome dye, and vermillion produced the best results to enable to see fine wrinkles and grooves under the magnifying lens.

A total of 30 subjects were included in the study in the Department of Oral Pathology and Microbiology after ethical clearance. Participants having any known allergy to cosmetic products or any lesion or scar on the lips were excluded from the study.

The lips of the subject were first cleaned thoroughly using wet cotton with a cleanser and then with sterile cotton. The Vaseline body lotion was applied on the vermilion zone of 30 volunteers and after one-minute fixation, lip prints were taken on a bone china cup, glass, and thermocol plate. All the 30 volunteers applied traditional lipstick which leaves visible print and lip prints were taken on a plain white sheet for comparison of latent lip prints.

After collecting all the samples, a camel hair brush was used for the application of all three chemicals individually by simple tapping on all three surfaces. Application of dye was continued until the print became clearly visible for the study and then the excess powder was removed. Developed latent lip print was then compared with the visible lip print for clarity of lip outline and lip grooves. Two observers examined the latent lip print separately and compared it with the patent lip print for grooves and lip outline using a parameter of Good (++), Fair (+), and Poor (-) as per analysis done by Singh et al. 8 All the parameters were statistically evaluated using chi-square test.

Two observers examined the latent lip print separately and compared it with the patent lip print for grooves and lip outline using a parameter of Good (++), Fair (+), and Poor (-) and statistically evaluated the data using chi-square.

GOOD (++): Lip outline and lip grooves that can easily be studied.

POOR (-): Lip outline can still be noticed but lip grooves cannot be appreciated

(a): Visible lip print on plane sheet, (b): Lip print on thermacol by all three chemicals 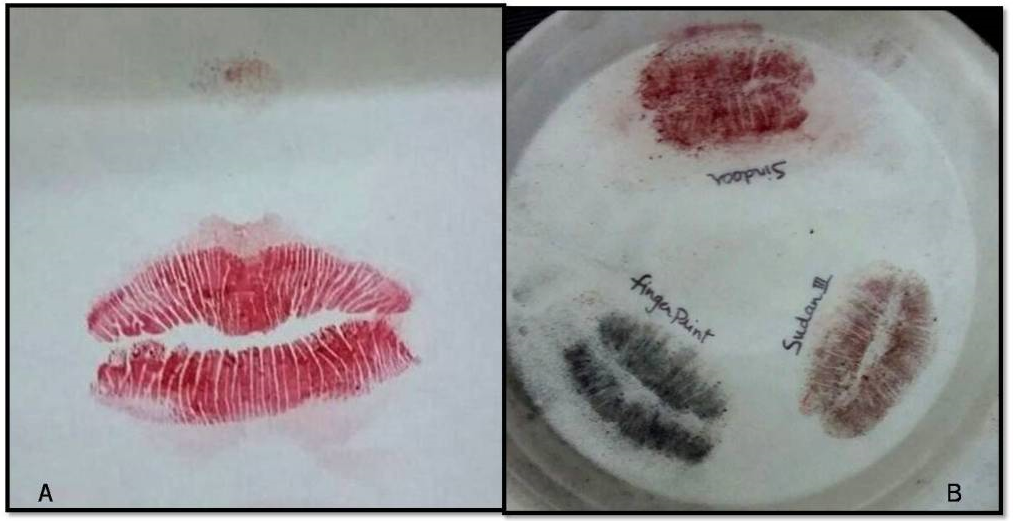 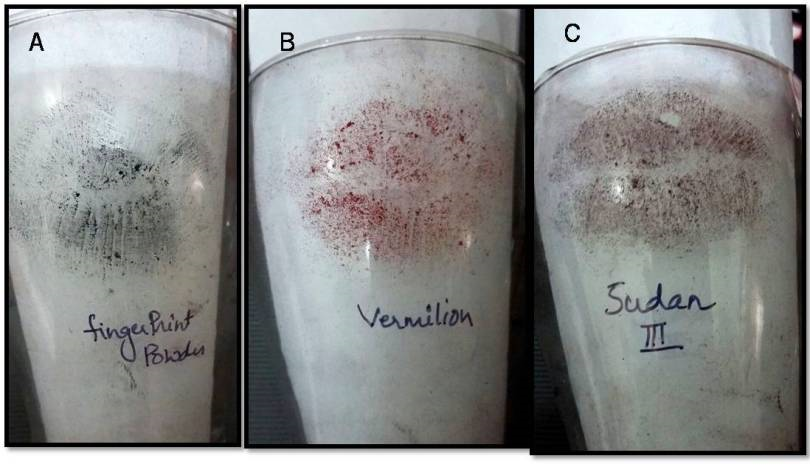 Distribution and comparison of latent lip print outcomes between developers 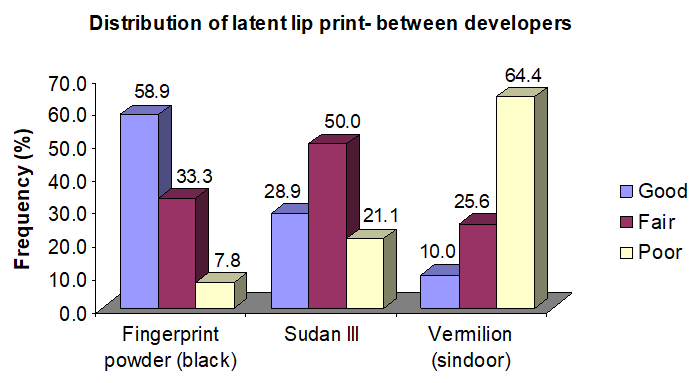 Distribution and comparison of latent lip print outcomes between surfaces 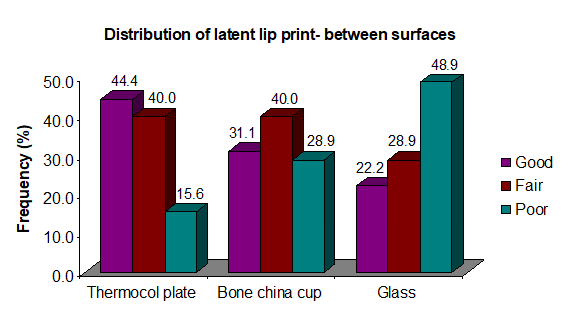 Lip prints at crime scenes are rarely mentioned simply due to the fact most investigators and/or crime scene examiners do not look for them. It is important to note though, lip prints left at scenes of a crime are more prevalent than one thinks.

Lip prints can be traced from various surfaces like glass, plates, clothes, cutlery, cigarette butts, etc. Similarly, the invisible or latent lip prints can also map out using aluminum and magnetic powder. The efficacy of developing lip prints by different chemical developers depends on the surface of the object on which lip print was made and the composition of the chemical compound used.5, 8, 9

This study aims to compare the efficacy of different chemicals or developers when used on various inanimate surfaces or vehicles. Current research also tests the effectiveness of particular surfaces in the retrieval of lip print in personnel identification.

It has been found that lysochrome dyes, such as Sudan III, aluminum powder, indigo dye, fingerprint powder can be developed successfully for latent lip print purposes.9, 10, 11

In this study, fingerprint powder was found to be the best developer followed by Sudan III and vermilion. In the past literature also fingerprint powder was found to be of prime importance due to its composition and mechanical properties. Alvarez Segui et al. in 2000 found in a study that fingerprint black and silver metallic powders be the most effective for the development of latent lip print.12, 13 On the other hand Trozzi et al. 2001 stated that Sudan black is the best developing agent for lip prints contaminated with foodstuff, oils, and other fatty substances while Alvarez and Castello in 2002 were found lysochrome dyes as a better lip print developer than fingerprint powder.14

It has also been stated that black fingerprint powder can be used on a wide range of surfaces as it has fine particle size and mechanical attraction property towards latent print residue. While the Sudan III powder can be used only for smooth and glossy surfaces. Vermilion powder was found dense in consistency and uneven dispersion and thus didn't trace the minor details of the latent lip print.15

On assessing the three inanimate surfaces it was found that the thermocol plate gives the best results followed by bone china and glass. Various investigators divided the surfaces into three categories. Accordingly, they are of three types: POROUS TYPE - it readily absorbs the chemical substance and the print is more durable. eg- paper, thermocol, cardboard. NON-POROUS TYPE – it repels the substance thus not absorb the chemicals so the print is not clear. Eg- glass, bone china. SEMIPOROUS TYPE – intermediate between porous and nonporous. Eg- polished wood, smooth surfaces. They have found thermocoal medium as the best surface compared to any other vehicle. Thermocol plates gave the best result due to their porous nature in comparison to bone china and glass.9, 13

The conclusion most noted during this research is that the Fingerprint powders the best developer and the Thermocol plate the best surface. The findings of this study may be beneficial for investigators in developing visible and latent lip prints. Also, the fact that lip prints are hereditary yet considered to be individualistic, each possessing its unique characteristics. For this reason, it is safe to suggest lip prints can and should be included in the forensic sciences arena as a legitimate means of identifying persons of interest connected with criminal activity. However, further studies with a larger sample size are needed to validate the findings.