Background: Squamous cell carcinoma is the most important and the most common malignant mucosal neoplasm of the head and neck accounting for over 90% of all malignancies. Conventional oral Squamous cell carcinoma is frequently present in general cancerous conditions. It is bundled up with six different variants. Histomorphologically every variant shows a unique appearance. This raises an opportunity for the different diagnostic consideration with the precise management decision.

Methodology: All cases of OSCC reported at our institution Dentopath Pathologies Amravati in past two months were scrutinized. Representative sections containing the full thickness of the tumor were used for histopathological grading. The structure and identification of carcinomas were done microscopically by two expert dentopathologist.

Discussion: The behavior of the OSCC varies amongst due to the presence of different morphological type of tumor. A few studies on OSCC malignancy grading with different clinical parameters were made. In the present study different types of variants are seen according to their histopathological appearances.

Conclusion: Histopathological knowledge is very important for the precise diagnosis. Squamous cell carcinoma is the most common neoplasm of oral cavity. However, variants of the same show very less frequency. Hence, it became challenge for the appropriate diagnosis as many times a misdiagnosis affects the course of treatment of the patient

Verrucous carcinoma is the most common variant of squamous cell carcinoma seen in oral cavity, especifically at the buccal mucosa or gingiva due to the excess use of tobacco, alcohol and poor oral hygiene.3 Clinically, VC of mouth composed of cauliflower like exophytic growth, which are thickened and club-shaped, and lined by well differentiated squamous epithelium.4 The microscopic examination of verrucous carcinoma appearance with abundant keratosis and parakeratosis rising with from a fold, acanthotic squamous epithelium which leads to appears like “church spires”.5 Parakeratotic crypting is the most common feature. Advancing margins of tumor are typically broad or bulbous rete pegs with pushing rather than an infiltrative appearance. Hybrid abrasion observe, when tumors present the dominant microscopic features of VC, but it contain small areas of tumor invasion.6, 7 To diagnose VC, ample sectioning and good demonstrative sampling of the base of lesion are needed as evidence of invasion is required for definite diagnosis.8 The features of VC represent invasion with further acanthosis and broad based rete pegs prolonging deeply into the stromal tissue, while Verrucous hyperplasia should not spread more intensely than adjacent uninvolved epithelium. Also, Verruca Vulgaris has a prominent keratohyline granules and parakeratosis with sharply defined acanthotic rete ridges, not seen in VC. The biological behavior of VC is between non-neoplastic hyperplasia and conventional SCC.9 Therefore, it may be helpful to think of VC as an extremely well differentiated squamous cell carcinoma.

Basaloid Squamous Cell Carcinomas are variant of squamous cell carcinoma (SCC) of the head and neck. Tumor indicates variety of growth including solid, lobular, crebriform, cord, trabaculae, nests and glands or cysts. Large nests can have central comedo form necrosis.13 The component basaloid is most diagnostic characteristic feature, incorporating small, closely opposed moderately pleomorphic cells with hyperchromatic nuclei and scant cytoplasm into a lobular configuration with peripheral palisading, closely associated with or involving the surface mucosa.14, 15 These basaloid regions are in direct continuity with areas of squamous differentiation including abrupt keratinization in the form of squamous pearls, individual cell keratinization, dysplasia or SCC.16

Papillary squamous cell carcinomas are the most uncommon and distinctive variants of squamous cell carcinomas. Papillary carcinomas by definition are without pre or co existing benign lesions.17, 18 Papillary squamous cell carcinomas are uncommon but distinct variants of SCC of the upper aerodigestive tract mucosa, separable from verrucous SCC. The common most site for this infection is larynx followed by oro- and hypopharynx. Macroscopically, this carcinomas appearing as are polypoid, exophytic, bulky, papillary or fungiform tumours, soft to firm, arising from a broad base or from a narrow stalk. This carcinomas must demonstrate a dominant papillary architectural growth pattern with the evidence if malignancy. The papillary pattern comprises of multiple, thin, delicate filiform, finger-like papillary projections.19 The papillae contain a delicate fibrovascular core surrounded by the neoplastic epithelium. There are no specific or unique clinical or demographic parameters for this variant of SCC.20 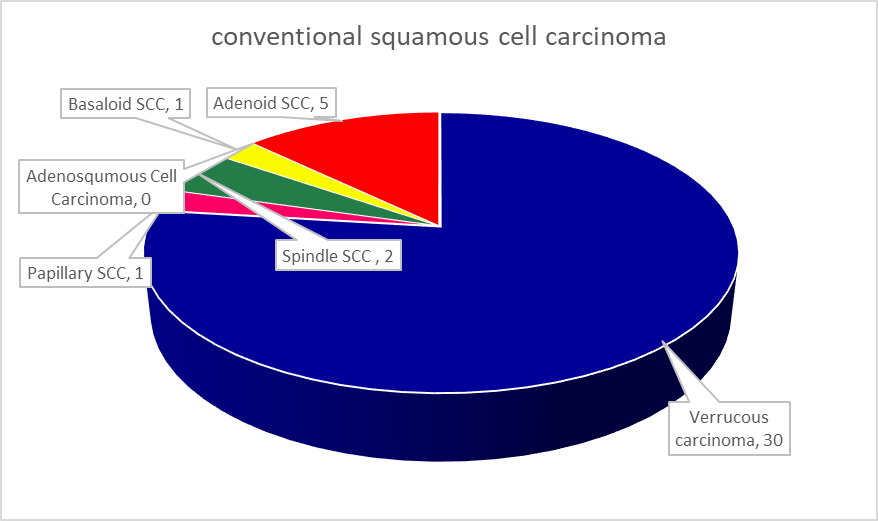 The 90% of oral cancer accounts for conventional squamous cell carcinoma. Along with this carcinoma variants of OSCC frequently arise within the oral cavity. The behavior of the OSCC varies amongst due to the presence of different morphological type of tumor. A few studies on OSCC malignancy grading with different clinical parameters were made.2, 5, 16, 21 In the present study different types of variants are seen according to their histopathological appearances. Joshua Franklyn et al.22 observed 1049 patients over 10 years of time period and supported the theory of 2-16% incidence rate of verrucous carcinoma. In the present study the carcinoma observed histopathologically and showed 30% of incidence, since the sample size of the present study is significantly lower. A study suggested that the lesion form due to these variant of OSCC are clinically difficult to differentiate and hence it is generally recommended to excise the lesion surgically. Basaloid squamous cell carcinoma is found to be in frequency of 1% of all squamous cell carcinoma which is in concordance with the study made by Thompson L who also concluded that the frequency of basaloid squamous cell carcinoma is >1%.5 The presence of spindle cell with elongated nuclei and scant eosinophillic cytoplasm at the periphery of the nest of the basoid cells is the microscopic appearance observed by Shinno Y et al.23 in his case report which is similar to the microscopic observations found in our study. Yasunori T et al.24 suggested that clinically, both papillary squamous cell carcinoma and verrucous carcinoma appear as an exophytic, papillary tumor, but the latter is white, warty and fungating with multiple filiform projections. Careful histopathological investigation is needed to establish the correct diagnosis, which is essential for appropriate treatment their findings are concordance with our study.

Histopathological knowledge is very important for the precise diagnosis. Squamous cell carcinoma is the most common neoplasm of oral cavity. However, variants of the same show very less frequency. Hence, it became challenge for the appropriate diagnosis as many times a misdiagnosis affects the course of treatment of the patient. For the dentopathologist to ensure the correct diagnosis multiple sectioning required. The conclusion made in the present study is limited to less sample size and in lesser population area. For the more farm conclusion a revise study with a different population area and bigger sample size is required.

JM Damiani KK Damiani K Hauck VJ Hyams Mucoepidermoid adenosquamous carcinoma of the larynx and hypopharynx: a report of 21 cases and a review of the literatureOtolaryngol Head Neck Surg19818923543