Non-extraction orthodontic treatment in a patient with severe anterior crowding

Description: Since the patient did not want to go for extraction of premolars, treatment involved use of Pendulum appliance along with upper and lower pre-adjusted edgewise appliance (0.022x0.028” slot) with MBT prescription. Various elastics and overlay wires were used along with proximal stripping for the correction of severe crowding in upper and lower anterior teeth.

Patient exhibited a mild convex profile with competent lips at rest and a Class l incisor relationship on a Class l skeletal base with slightly decreased vertical proportions. This was complicated by severe upper and lower labial segment crowding with buccally erupting both upper canines and left lower canine. UL2 was in crossbite relationship with LL2. Also the molar relationship was half unit class ll bilaterally. Lower incisors were proclined and centreline discrepancy of 3 mm was present.

The cephalometric analysis revealed a Class l skeletal antero-posterior relationship with ANB of 3° and wits appraisal of -1 mm, which supported the clinical findings.

Aims and Objectives of Treatment

To reinforce the anchorage during distalization, the Pendulum appliance design1 involves a palatal acrylic button with wire extensions to the upper first and second premolars bilaterally. Once the molar distalization completes, these wire extensions are removed from the premolars and same Pendulum appliance could be used to keep upper molars in their overcorrected position, while premolars and canines are being distalized. The molar tubes bonded onto the upper second molars and passively ligated to upper first molars with the help of SS ligature for anchorage reinforcement during distalization of upper premolar and canines. A lingual arch to reinforce the anchorage in the lower arch during aligning and levelling.

Provided that the general archform was maintained and a good occlusal interdigitation was achieved, the long term stability of the treatment changes was considered good.

Upper and lower bonded retainers were considered appropriate to avoid any chances of crowding to reappear specially in the lower arch as the anterior teeth were proclined.

After 2 more months Proximal stripping done in the lower incisors and premolars and an open NiTi coil spring placed between LL1 and LL4 to create space for LL3. After 3 months overlay archwire 0.014 placed in lower arch and LL2 and LL3 brackets engaged with the archwire. 3 months later 0.019x0.025” SS archwire placed in upper and lower arches. Space consolidation done with the help of elastomeric chain in upper arch.

Total duration of the treatment was approximately 2 years.

Clinically we were able to achieve a Angle’s Class I occlusion bilaterally with good intercuspal relationship. Lower left second molar presented with distobuccal rotation which was not completely erupted at the time of appliance removal. All the treatment objectives were achieved and patient was happy with the treatment results.

Cephalometrically, The antero-posterior position of jaw bones did not change as depicted by the same pre and post treatment cephalometric values of SNA and SNB.

Vertical growth continued throughout the treatment and equated to 6 mm increase in total anterior facial height. The maxillary- mandibular plane angle increased by 2° (from 18° to 20°), whereas the face height ratio remained unchanged.

The upper incisor to maxillary plane angle increased by 3° (from 112° to 115°) suggesting mild proclination of maxillary anterior teeth. This could be possibly due to some amout of anchorage loss during upper molar distalization. Lower incisor to mandibular plane angle decreased by 3° (from 108° to 105°), suggesting a slight retroclination of lower anterior teeth due to proximal stripping and subsequent space consolidation. Lower incisal edge relative to A-Pog line and centroid of upper incisor root was same as the pre- treatment values.

Interincisal angle did not change from the pre- treatment values. Maxillary first molars were distalized by 3 mm, as demonstrated by reduction in U6 to PTV value as confirmed by superimposition. Slight decrease (3°) in nasolabial angle is seen (from 107° to 104°), which might be a result of proclination of upper incisors. Lower lip protrusion remained same as the pre-treatment values.

Post treatment panoramic radiograph indicated no change in the root lengths of upper and lower incisors and good root parallelism, except, upper left central and lateral incisors that presented with slight mesial angulation of roots. 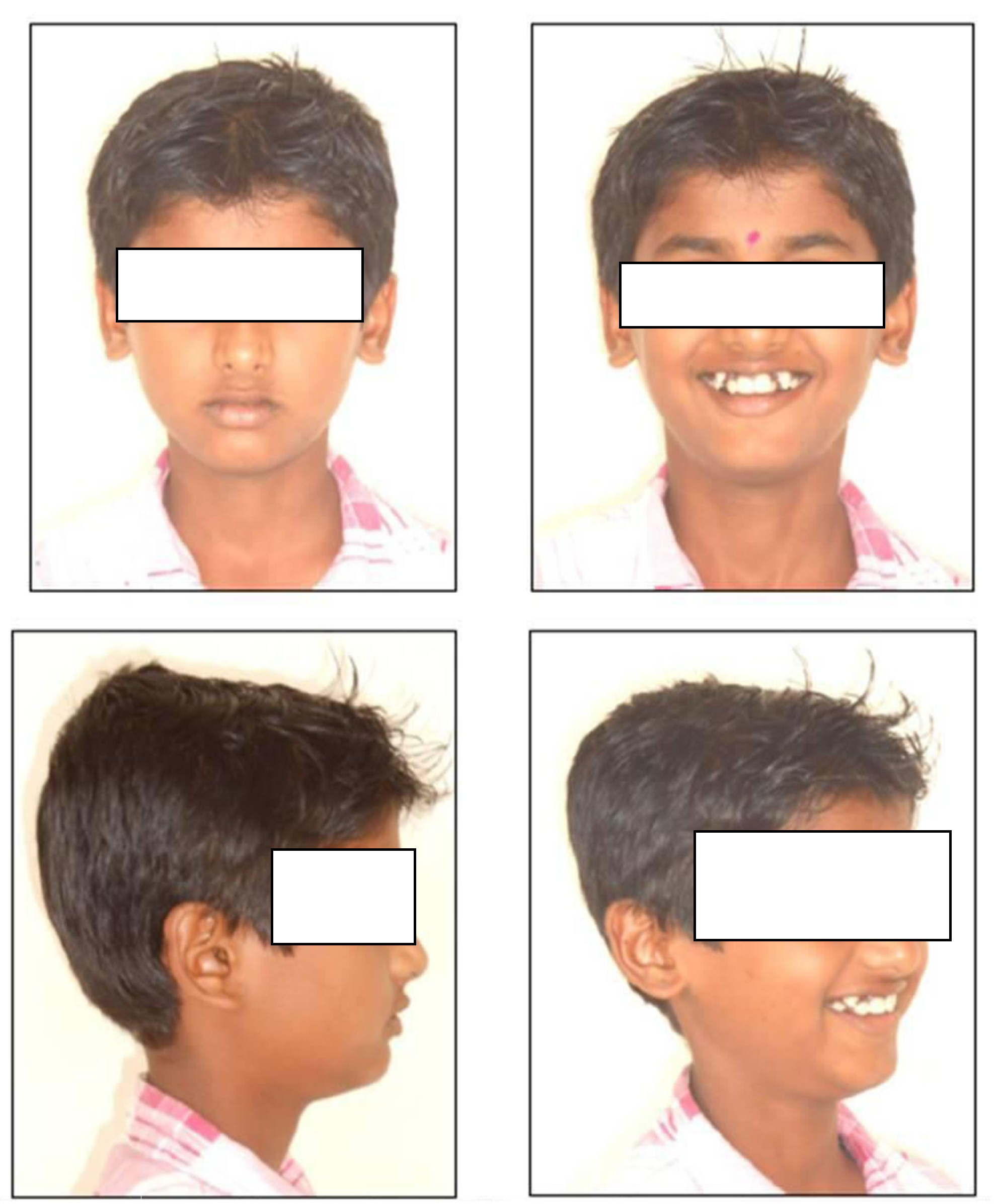 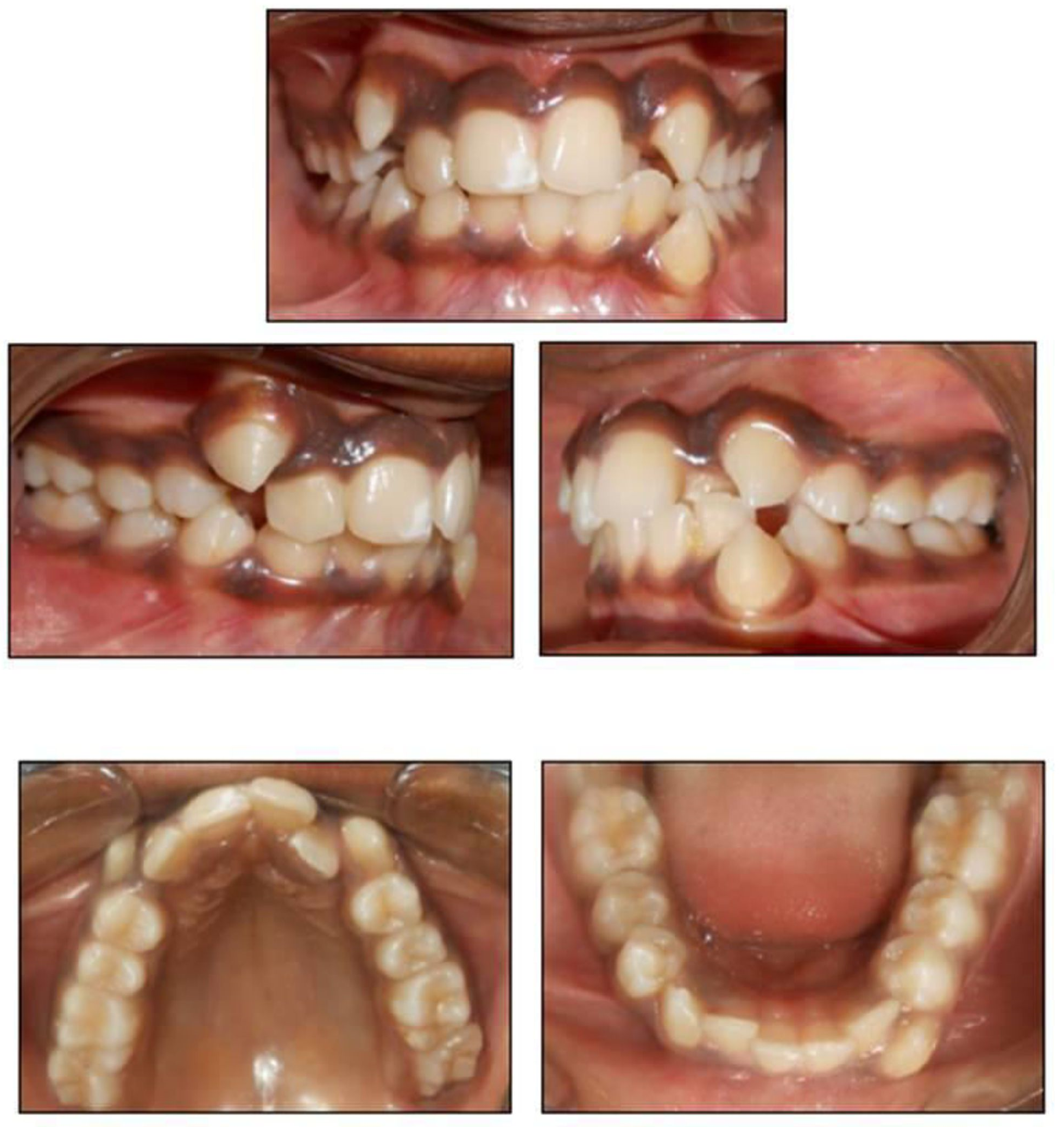 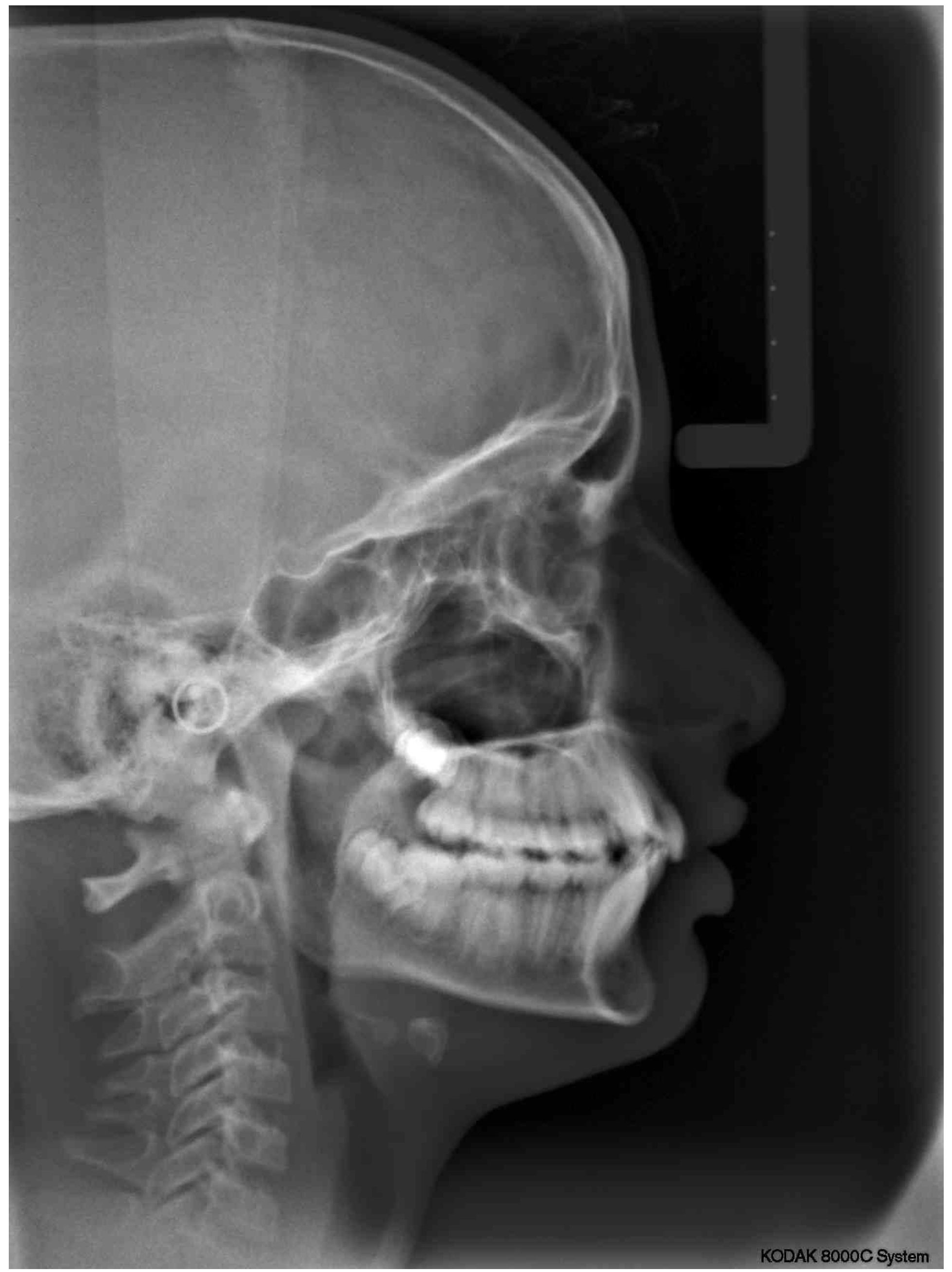 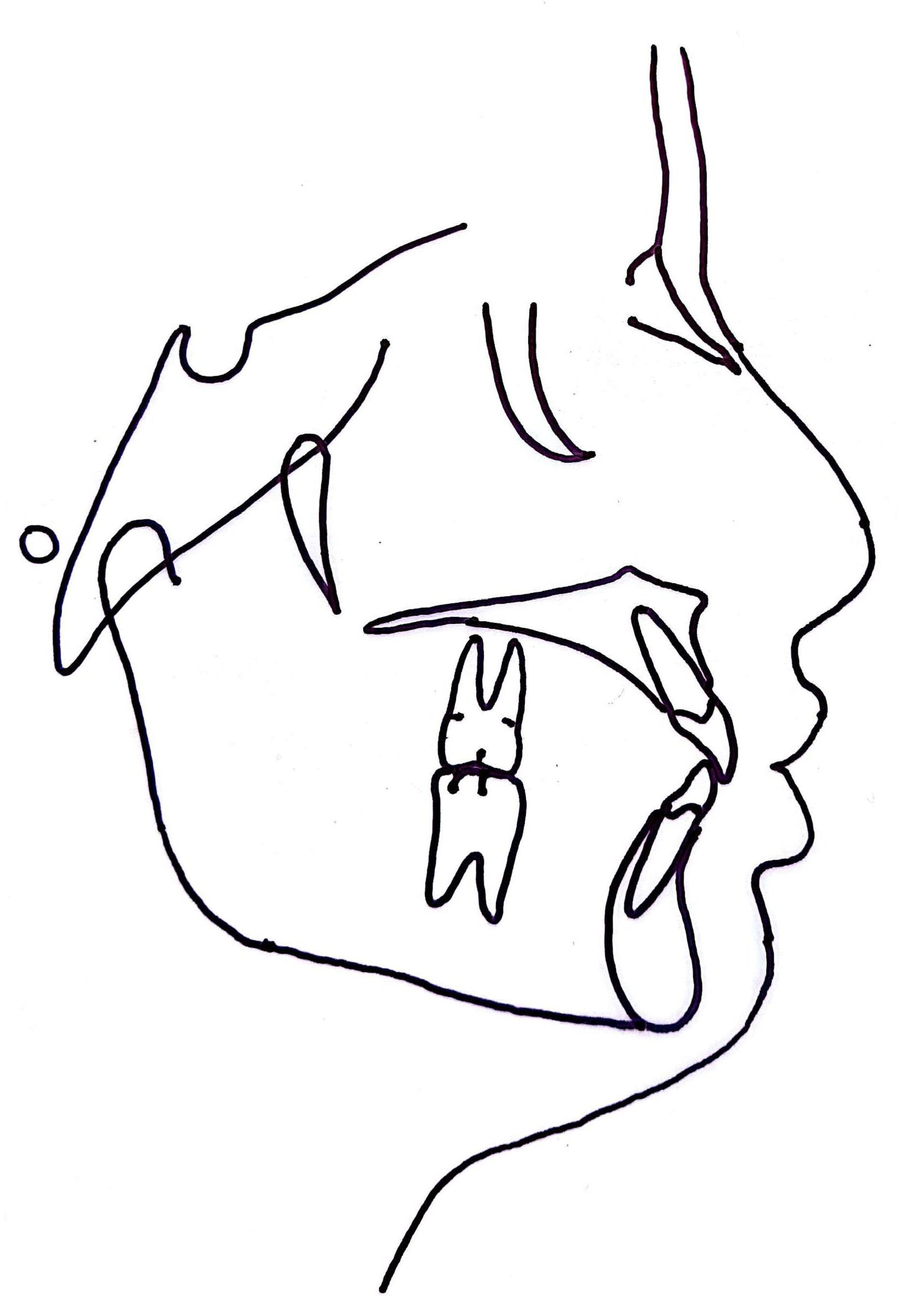 After molar distalization with pendulum appliance 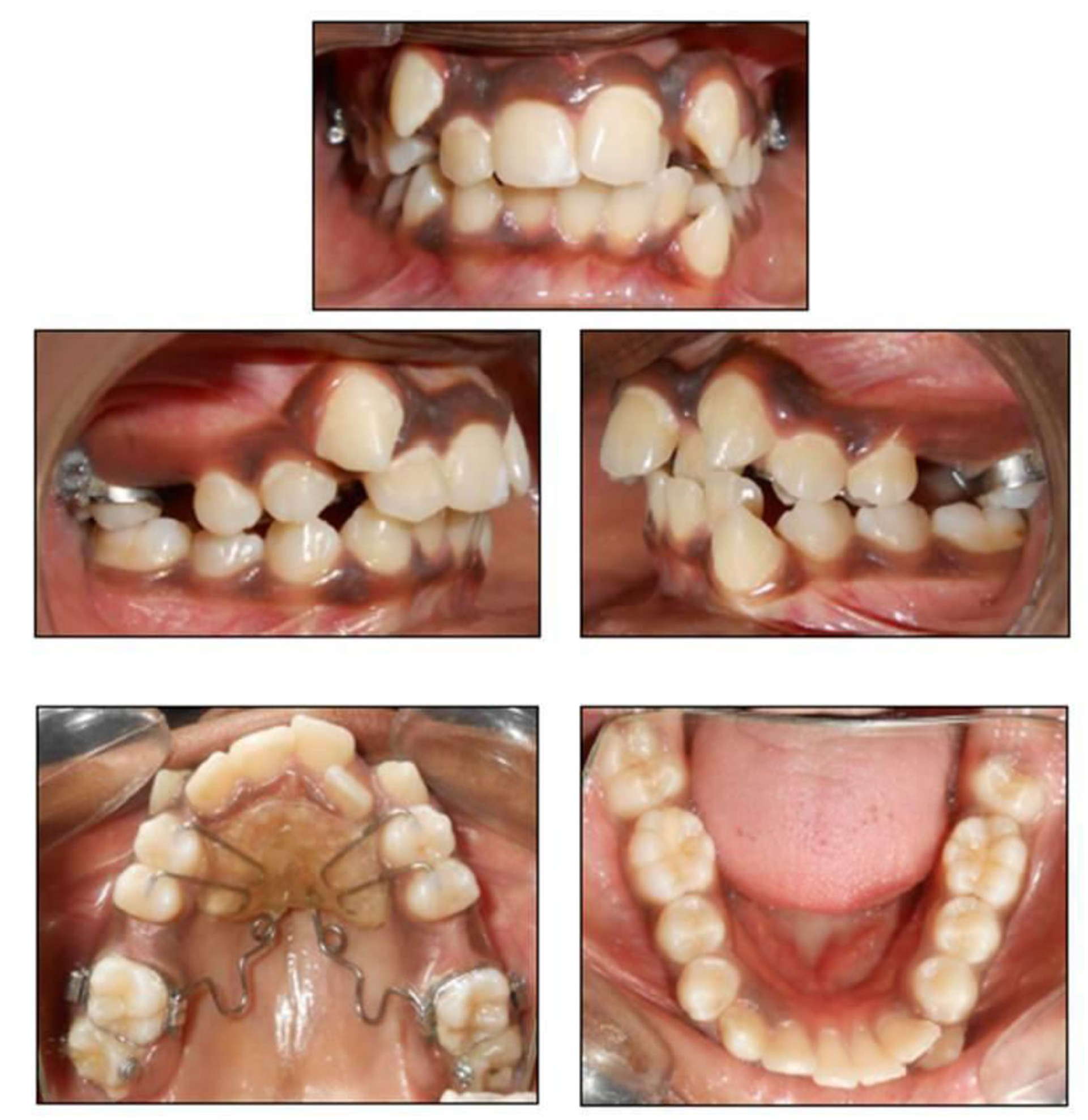 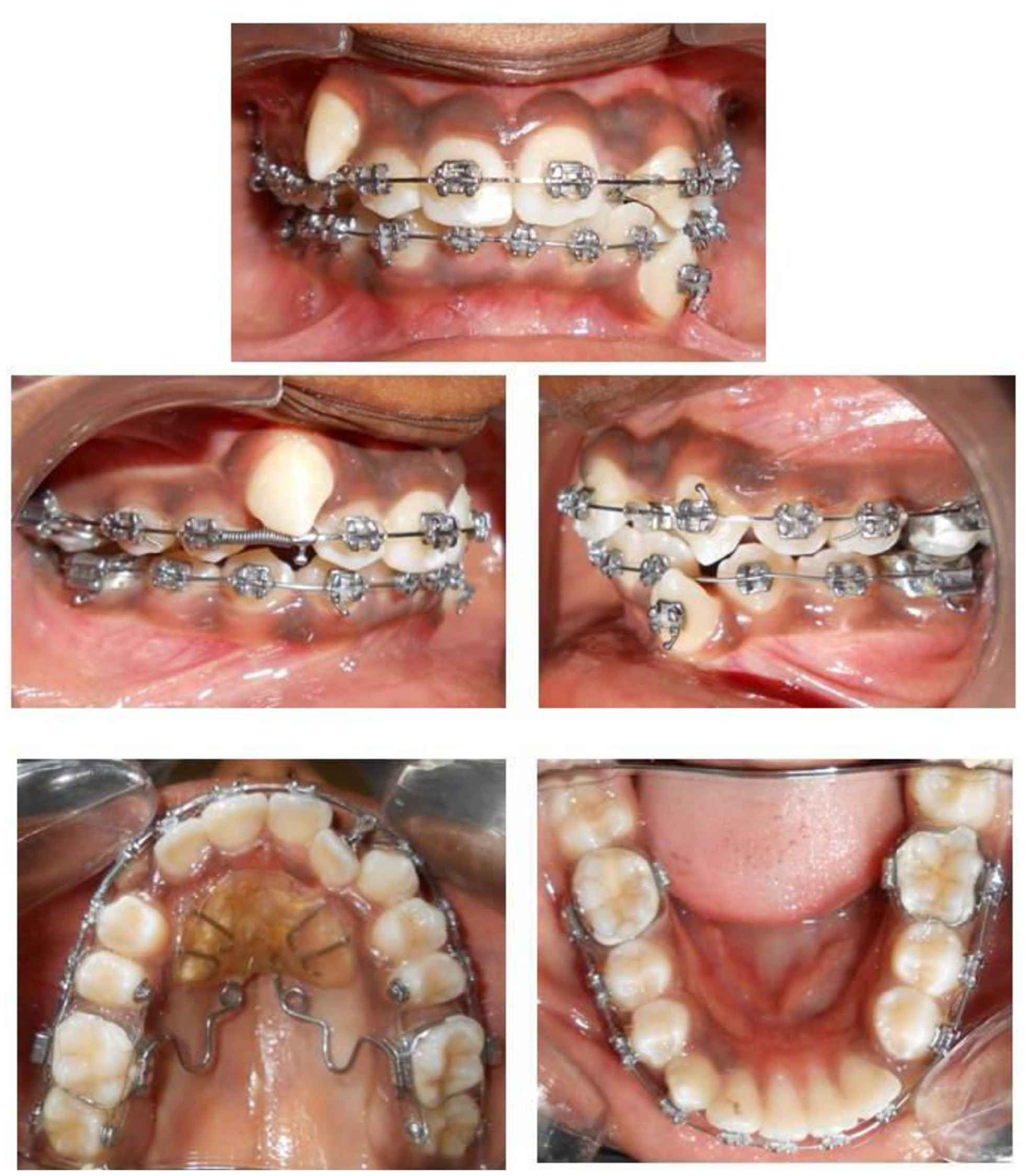 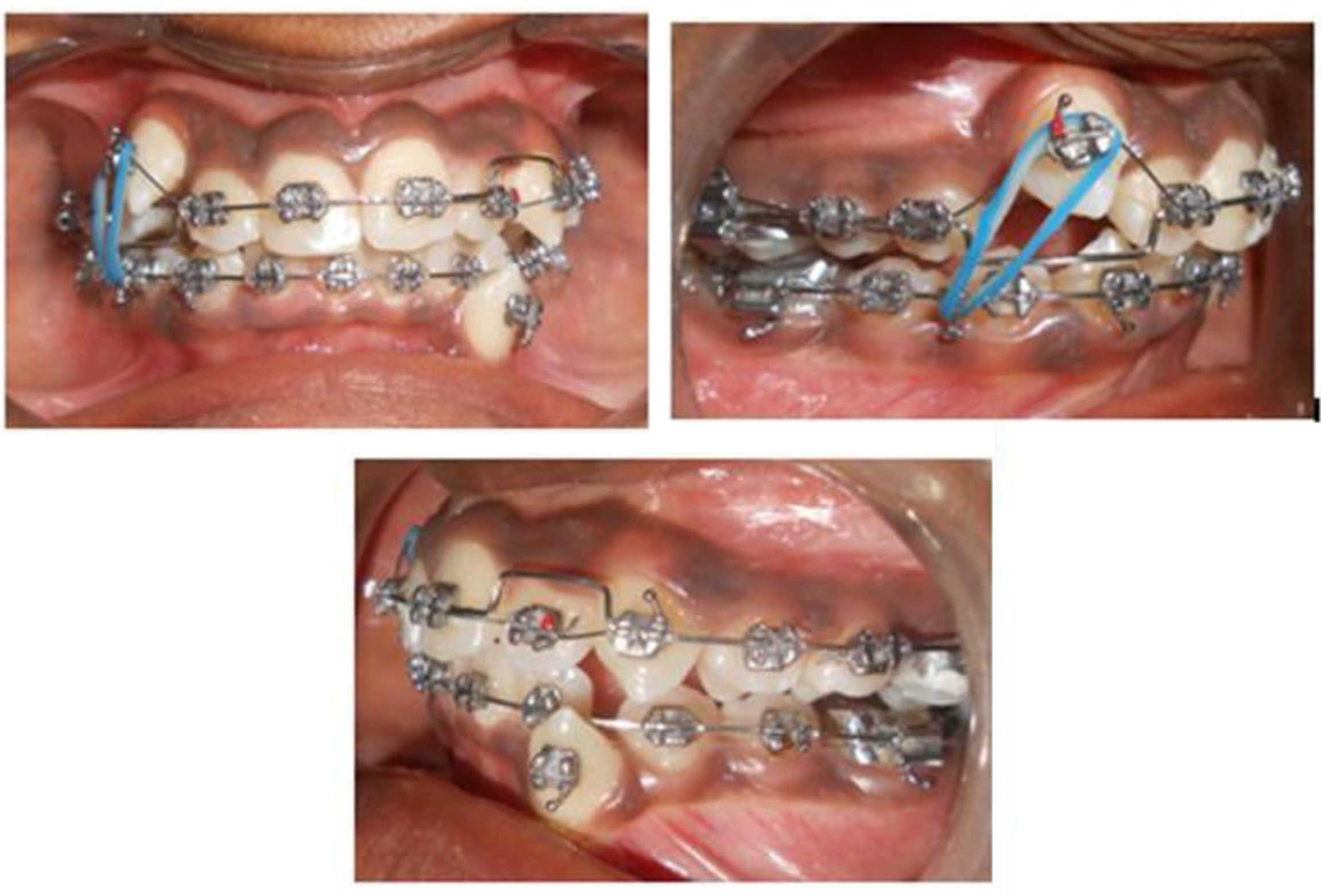 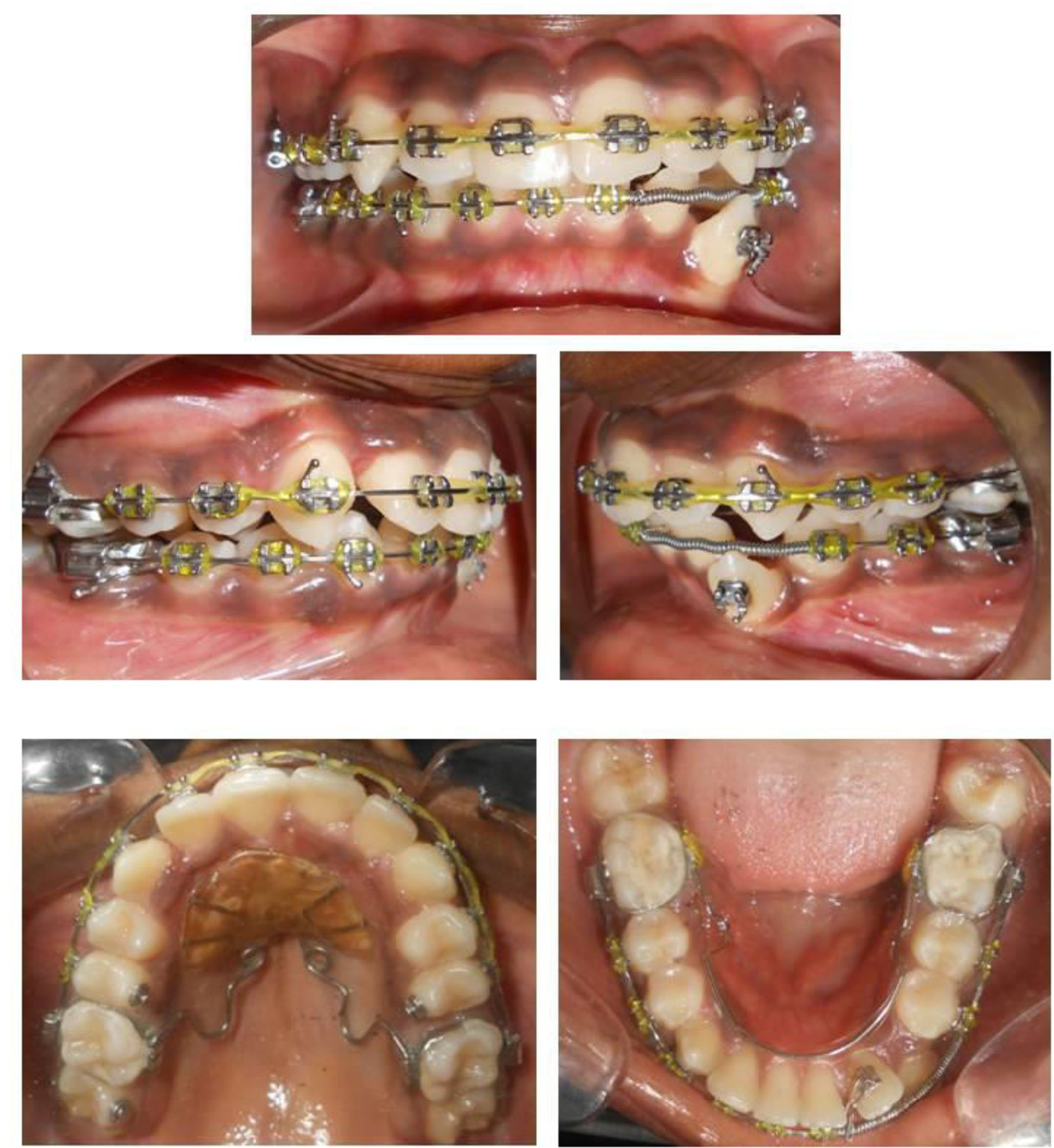 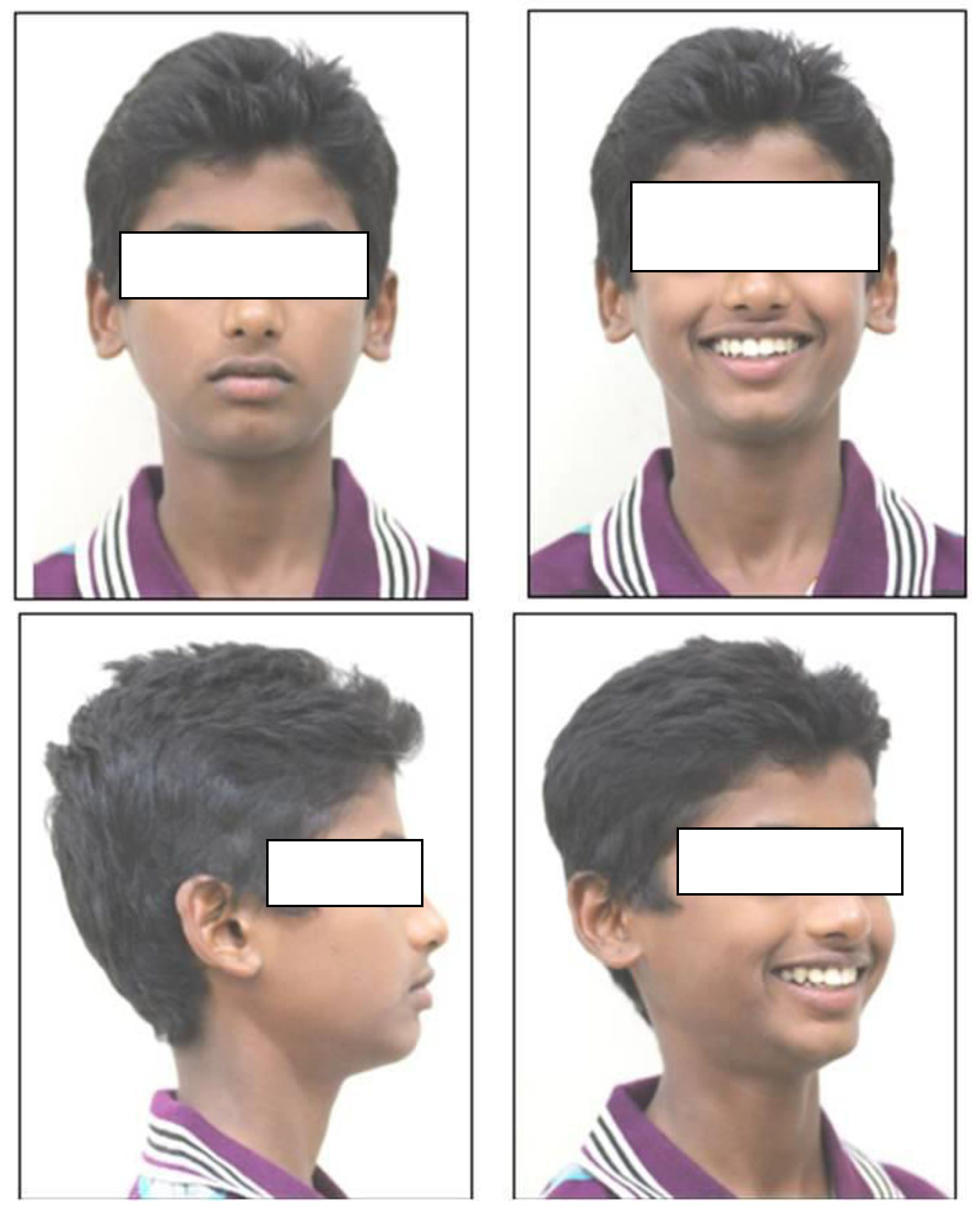 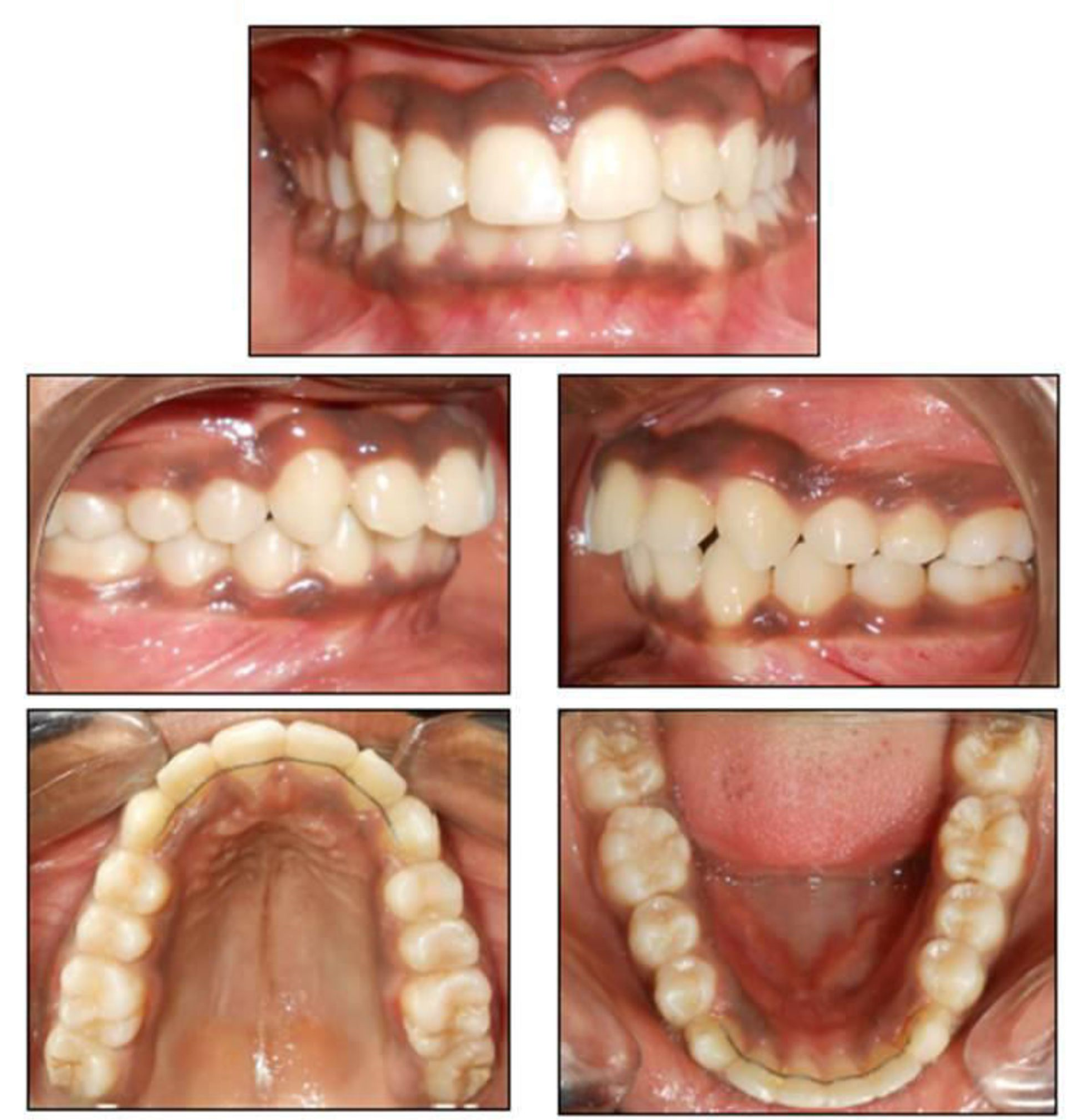 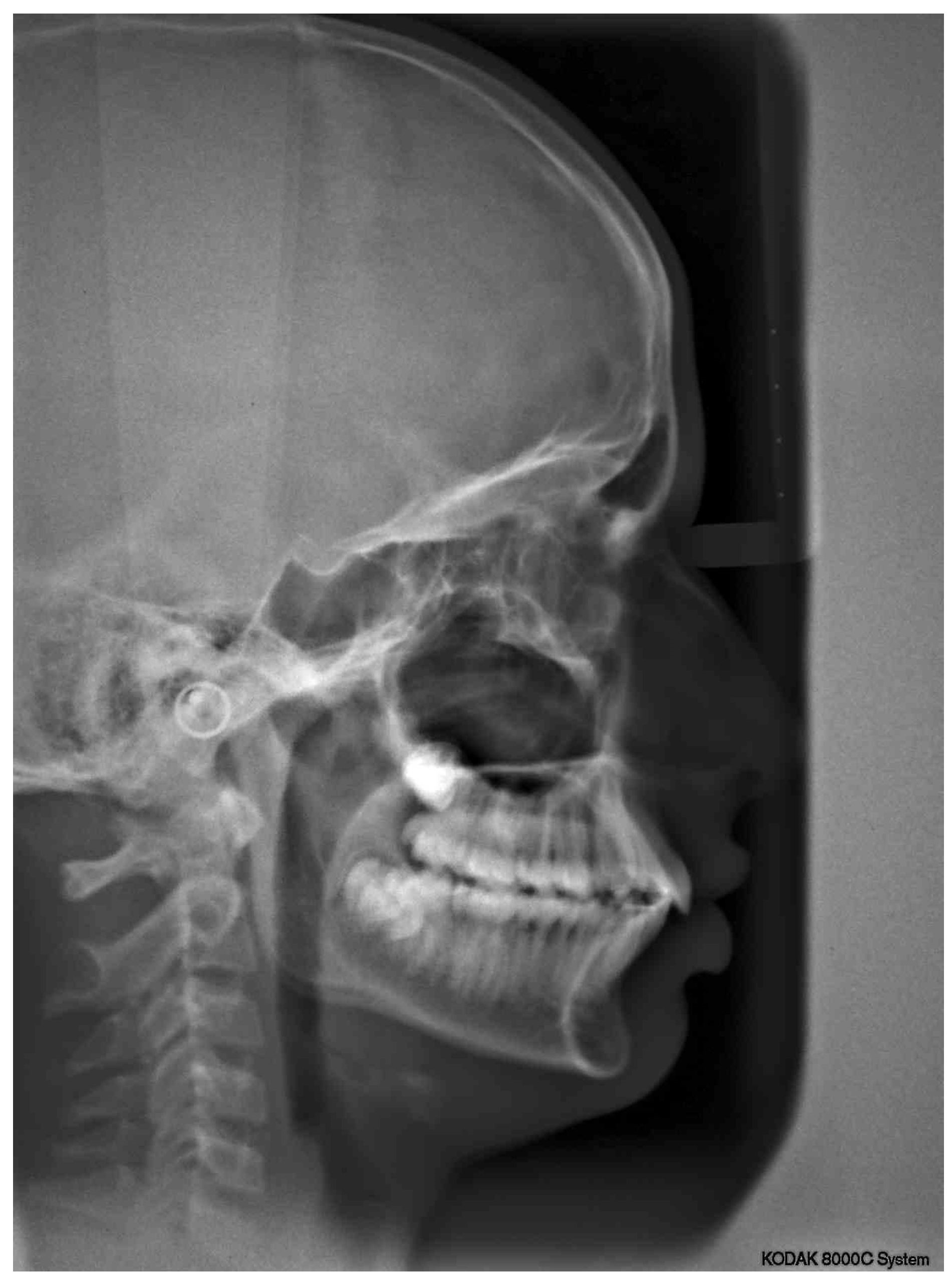 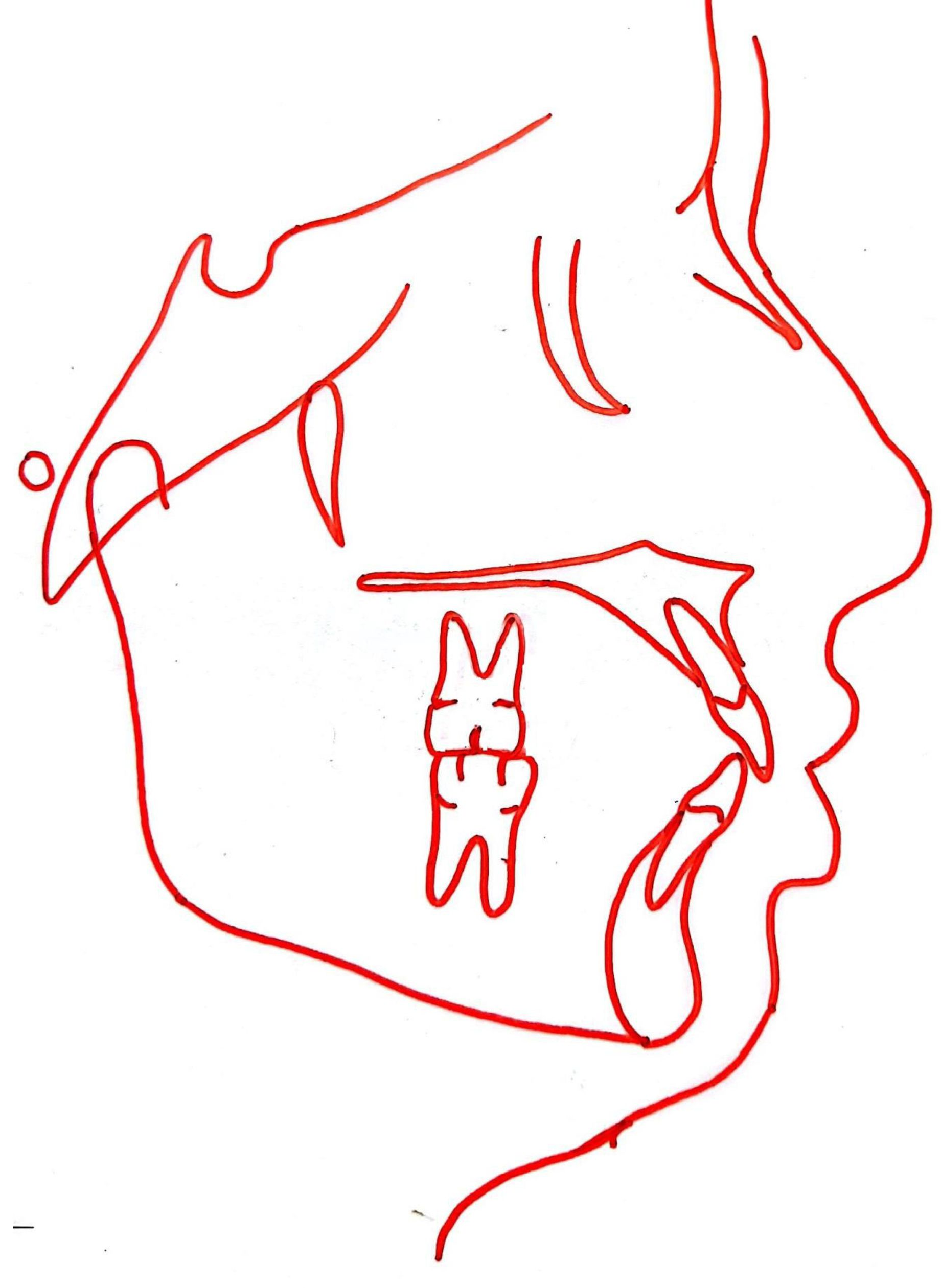 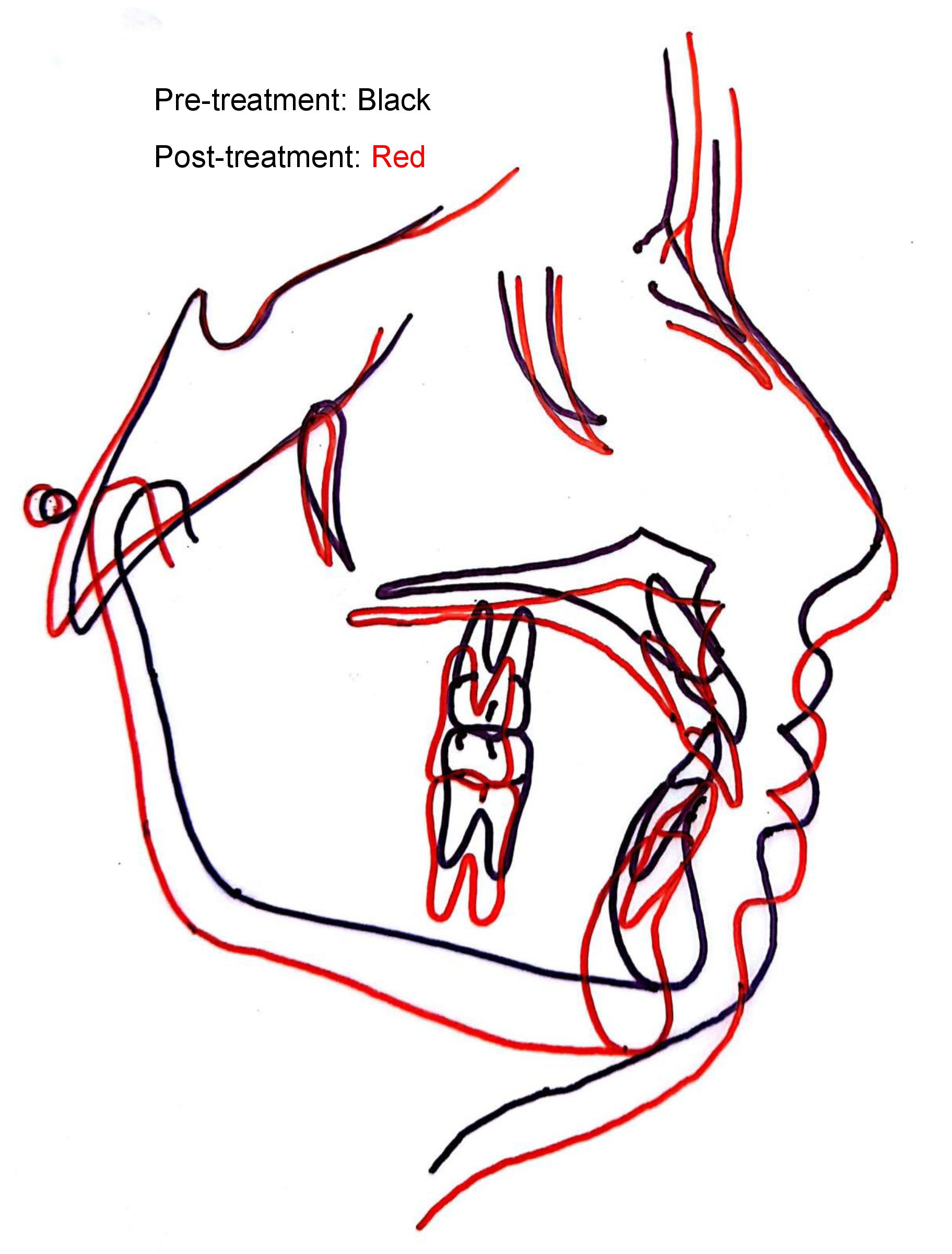 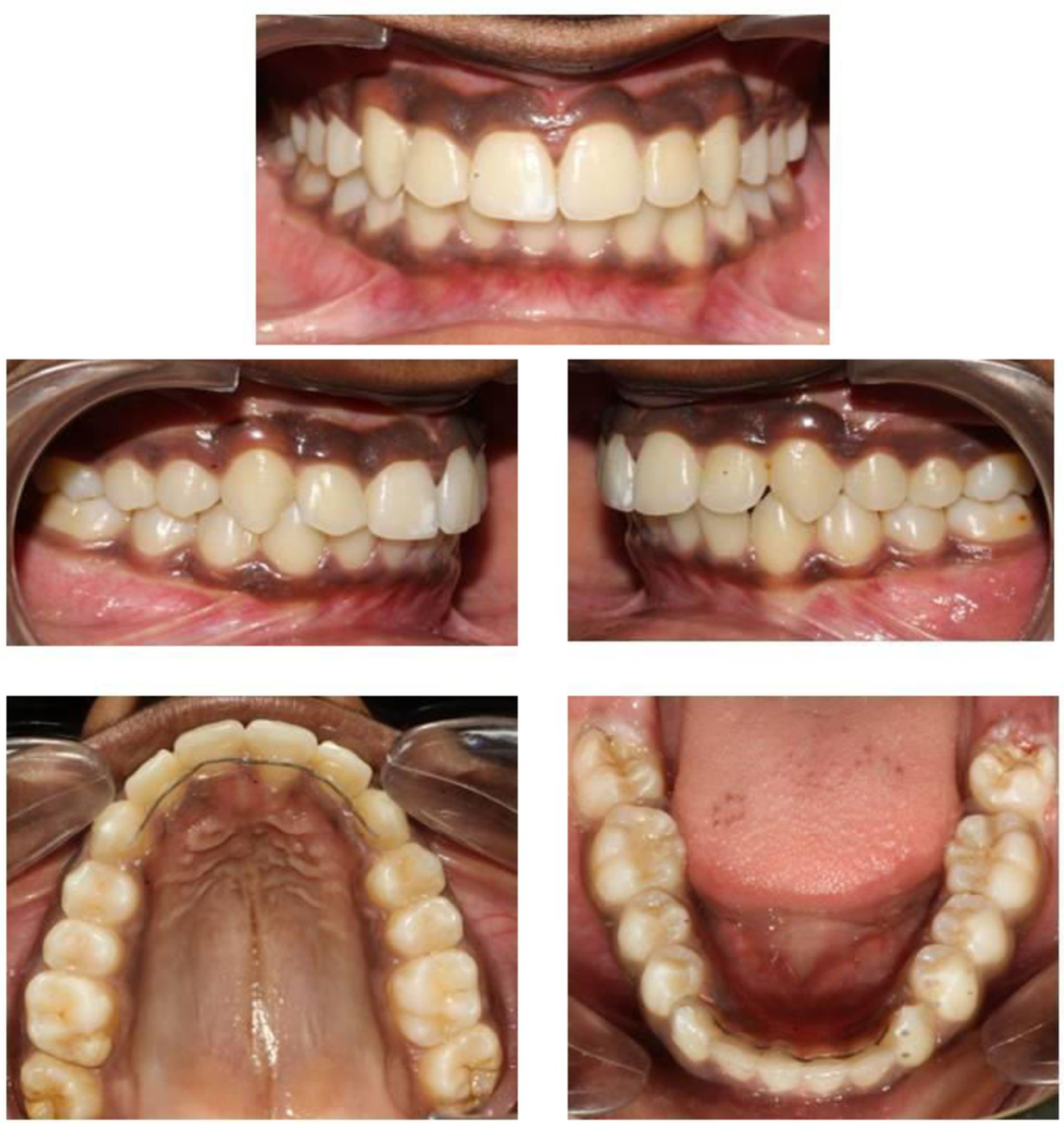 Considering the space requirement in both arches, extraction of first premolars in both the arches followed by space closure seemed like a good option. But the patient was not ready for any extractions.

So the final treatment plan was to distalize the upper first molars and create space for the decrowding in upper arch. This was further facilitated by the age of the patient, class l skeletal pattern and a slightly decreased lower facial height and a half unit Class II buccal segment replatioship antero-posteriorly. The upper first molar was found to be ahead of PTV by 18 mm, 3 mm more from its normal range. Maxillary incisor inclination was also within the normal range to consider Pendulum appliance as a favourable appliance for the maxillary molar distalization. Space for the decrowding in lower arch was gained by interproximal reductions of all teeth except molars patient agreed for this treatment plan.

To reinforce the anchorage during distalization, the Pendulum appliance design involves a palatal acrylic button with wire extensions to the upper first and second premolars bilaterally. Once the molar distalization was complete, these wire extensions were removed from the premolars and same Pendulum appliance was used to keep upper molars in their overcorrected position, while premolars and canines were being distalized. The molar tubes were bonded onto the upper second molars and passively ligated to upper first molars with the help of SS ligature for anchorage reinforcement during distalization of upper premolar and canines. To reinforce the anchorage in the lower arch during aligning and levelling, a lingual arch was placed.

Treatment results demonstrated a slight increase in upper and lower anterior facial heights which could be due to erupted second molars before the distalization as discussed by Bussic et al.21 The erupted second molars also led to tipping of maxillary molars rather than pure translation.22, 23 The molars were overcorrected to a super class l molar relationship to counteract some amount odf anticipated relapse as advised by Fuziy et al.23

The maxillary lateral incisors would have benefitted from further labial root torque. Cephalometrically upper and lower anterior teeth were slightly proclined after the end of treatment, but clinically it was not significant.

The left lower second molar (LL7) was rotated distobuccally but it could not be included in the treatment as it was not fully erupted. Upper left second molar was tipped distally at the end of treatment. This was expected to get corrected by further settling of occlusion.

In post- treatment panoramic radiograph, the roots of all teeth show good parallelism except UL1 and UL2, which showed slightly mesially angulated roots.