Juvenile psammomatoid ossifying fibroma is histological variant of juvenile ossifying fibroma, a fibro-osseous tumor of craniofacial bones with benign but potentially aggressive nature. Complete excision of tumor is essential as it is associated with very high recurrence rate. We have reported here a case of juvenile ossifying fibroma- a psammomatoid variety present in right maxilla in a 13-year old male child. Complete excision of tumor was done through intra-oral approach with the 2.5 years of follow up shows no recurrence.

Key message: Juvenile psammomatoid ossifying fibroma is fibro-osseous tumor of craniofacial bones with benign but potentially aggressive nature. Complete excision of tumor is essential as it is associated with very high recurrence rate.

Juvenile ossifying fibroma(JOF) is a rare benign tumor of the craniofacial bone differing from other fibro-osseous lesions in term of early age (under 15 years).1 Most common sites are paranasal sinuses, maxilla, fronto-ethmoid complex, orbit, mandible and frontal bone.2 JOF has two histologic variants psammomatoid type and trabecular type.3 Clinically JOF is asymptomatic, because of the painless rapid growth it is associated with facial asymmetry due to expansion of bone which may be associated with displacement of adjacent structures, paresthesia. Radiographically usually it will be a radiolucent, well-defined lesion sometimes associated with central radio-opacities.4 Because of aggressive nature of the lesion, early detection and complete excision is recommended.

A 13-year old, other-wise healthy male was referred to our center in March 2019 with the chief complain of swelling with respect to the right side of the midface since last 1.5 years. Swelling was painless, gradually increased in the size. There was no significant past medical history or family history. No any history of pus discharge was reported. Patient reported to nearby hospital with this complain and incisional biopsy was done suggestive of ossifying fibroma. Clinically there was a spherical, diffuse swelling on right side of midface with normal overlying skin and with obliteration of right naso-labial groove (Figure 1 a-b). On palpation swelling was firm, non-compressible. Intra-oral examination revealed well defined, bony hard selling in right buccal vestibule extending from 13-17 with bosselated surface and obliteration of right buccal vestibule (Figure 1 d). There was no any sinus opening or pus discharge. Grade I mobility was present w.r.t 14,15. 14 was drifted mesially. Single, oval in shape lymph-node palpable in right submandibular region which was freely mobile and nontender. 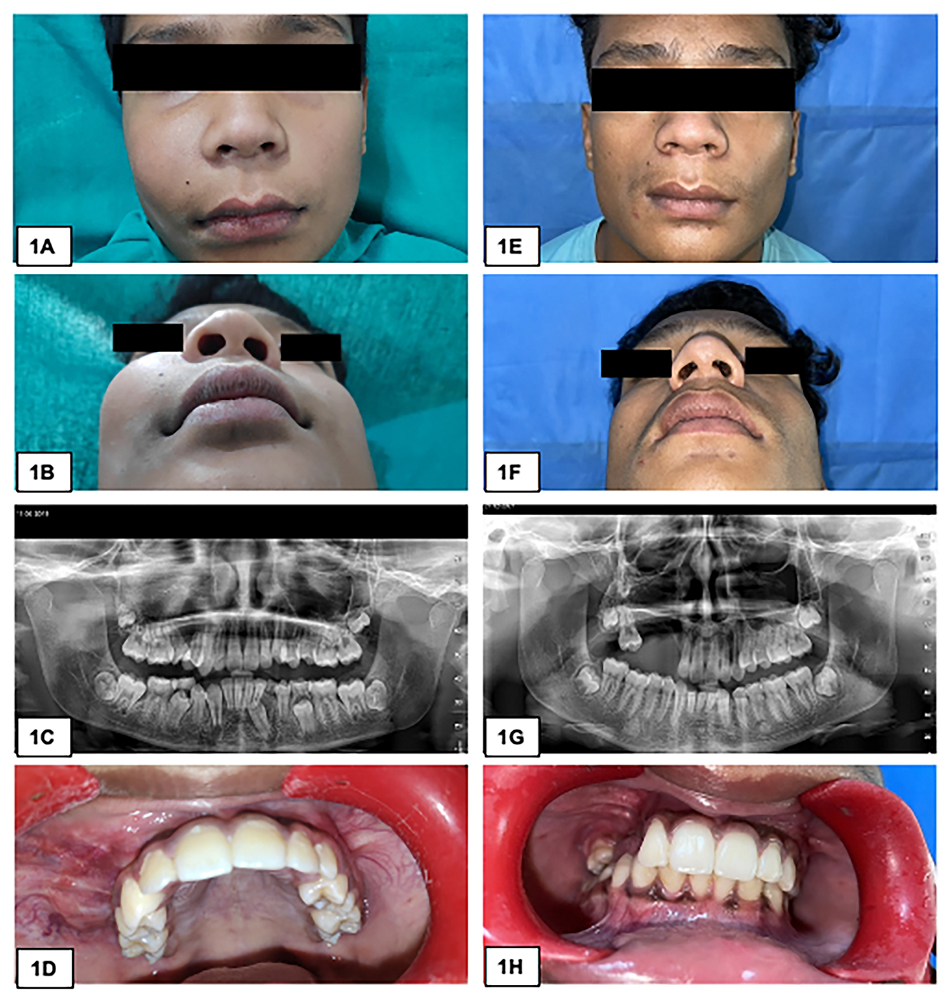 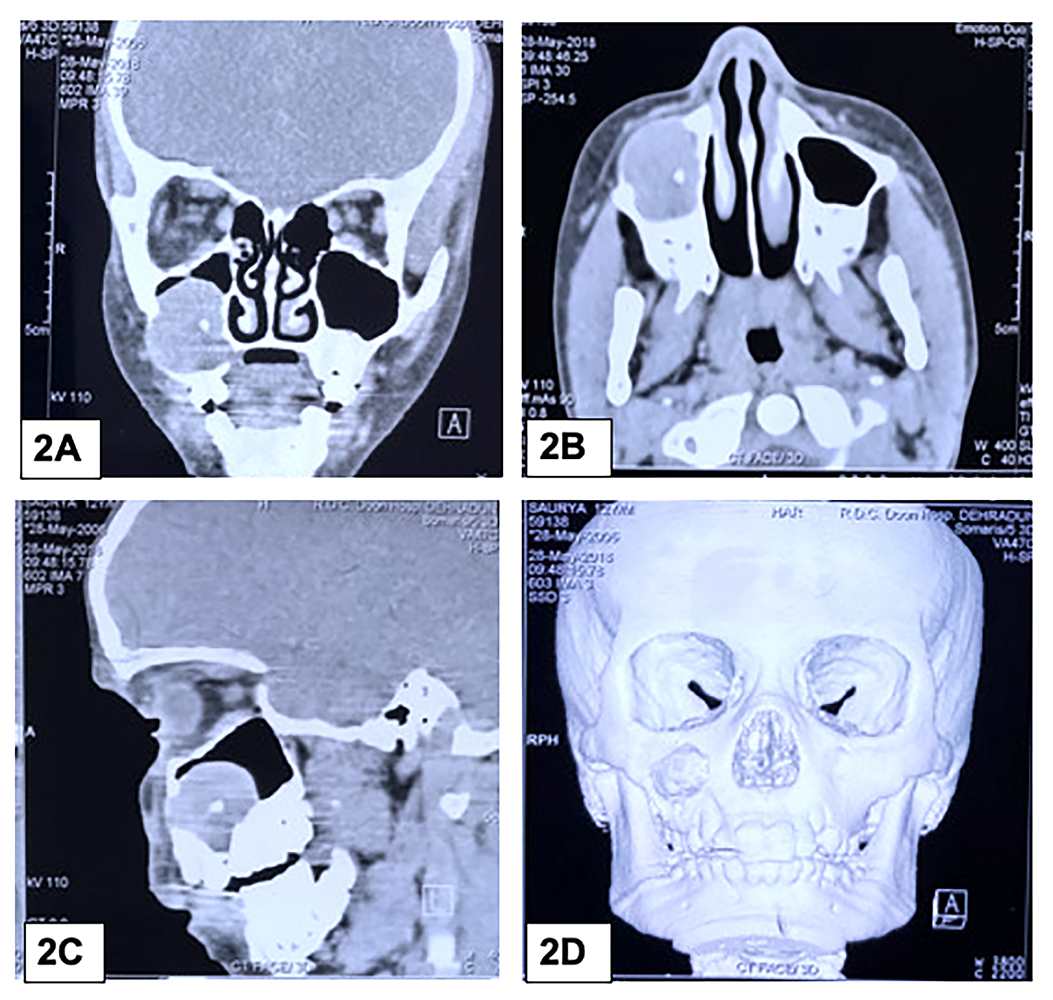 a-b) Complete excision of the lesion was done along with the extraction of 13,14,15,16 through intraoral crevicular approach under general anesthesia; c) Histopathologic examination revealed a cellular fibrous stroma made up of bland spindled to stellate fibroblastic cells with minimal atypia

Follow-up after 2.5 years shows no any signs of recurrence clinically as well as radiographically. (Figure 1 e-h).

Ossifying fibroma is a benign fibro-osseous lesion characterized by well-defined boundaries, and replacement of osseous structure with cell-rich fibrosis, and contain varying amounts of calcified tissue resembling bone, cementum or both. It can be cemento-ossifying fibroma (conventional ossifying fibroma) or juvenile ossifying fibroma (JOF). JOF is different from conventional ossifying fibroma by local aggressive behavior and age of onset. JOF most commonly occurs in children or adolescent. According to the WHO classification 2005, the age of onset is 15 years or younger it is also known as aggressive/active ossifying fibroma. JOF has two histologic variants psammomatoid type with spherical ossicles resembling psammoma bodies and trabecular type with trabeculae and fibrillar osteoid and woven bone.5 Most commonly JOF present as swelling because of expansion of underlying bone as presented in this case but can be presented with nasal obstruction, exophthalmos or bulbar displacement when associated with paranasal sinuses or orbit.1 JOF characterized radiographically by varying degrees of radiolucency to depending on the internal components of hard and soft tissue. Lesion will be well defined from surrounding normal bone.6 Histologically JOF resembles with fibrous dysplasia and cemento-ossifying fibroma. Fibrous dysplasia contains islands of epithelium which is not seen in JOF and in cemnto-ossifying fibroma there will be Prescence of osteoblastic rimming and cementicles like structure which usually will absent in case of JOF.7 Due to high recurrence rate of JOF 30-58%, design of appropriate treatment plan is important factor.8 There is controversy between aggressive treatment such as local radical surgery for complete removal of involved and surrounding tissues, while preserving the normal structures1 and conservative treatments like complete excision or enucleation or partial resection to limit facial deformity and normal appearance and function.3 In radical resection cases reconstruction options to be considered by primary or secondary means. In the present condition patient was relatively young hence complete excision of the tumor was planned to maintain the appearance and reduce the impact on growth. Complete excision of the lesion results in the excellent prognosis.5, 9 For the treatment of JOF the various factors to be considered and individualized treatment plan to be developed. These factors are: age, growth rate, site and involvement of surrounding structures.5